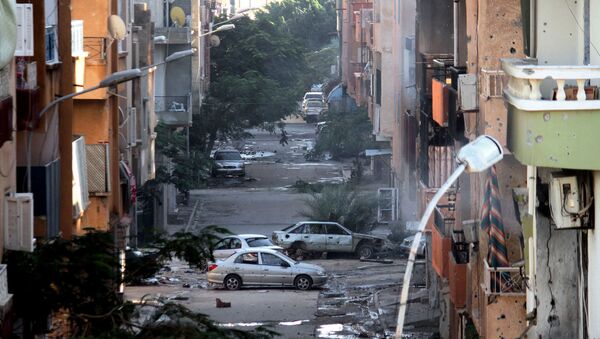 © AP Photo / Mohammed El-Sheikhy
Subscribe
At least 33 civilians were killed in hostilities in Libya in April, while 14 people were injured, the UN Support Mission in Libya said.

UNITED NATIONS (Sputnik) – Libya has been in a state of turmoil since the 2011 Arab Spring movement, which later led to a civil war and the overthrow of the country’s leader Muammar Gaddafi by Western-supported Islamic extremists.

The instability also led to the rise of numerous Islamic militant and terrorist groups, including the Daesh which is banned in Russia and other countries.

"From 1 April to 30 April 2016, the United Nations Support Mission in Libya (UNSMIL) documented 47 civilian casualties, including 33 deaths and 14 injuries, during the conduct of hostilities across Libya. Victims included two children injured, 18 men killed and five injured, four women injured, and 15 adults killed and three injured where the sex was not identified," UNSMIL said in a statement on Sunday.

According to the mission, the deaths and injuries were caused by gun shots, explosive remnants of war and shelling.

"Due to limited access and the multiple parties engaged in the conflict, who did not take responsibility for particular incidents, UNSMIL was unable to determine with certainty which party caused these civilian casualties."