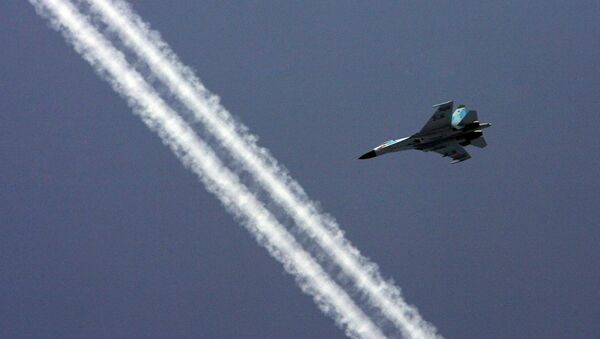 © Sputnik / Igor Zarembo
/
Go to the mediabank
Subscribe
International
India
Africa
According to the Russian Defense Ministry, the US recoinnaissance jet was intercepted in accordance with the international law.

The Russian Defense Ministry  responded to the Pentagon claims that a Russian aircraft allegedly performed an "unsafe" interception of a US jet over the Baltic region, saying that all Russian aircraft frights are carried out under international rules.

"All flights of Russian aircraft are held in accordance with international regulations on the use of airspace," ministry's spokesman Maj. Gen. Igor Konashenkov told reporters.

Earlier this month, the Pentagon accused a Russian Su-27 of flying too close to another US spy plane operating in the Baltic, again a stone's throw away from Russia's borders. The Russian Defense Ministry acknowledged the incident, but denied that unsafe maneuvers were performed.

"At the same time we want to note that the RC-135U reconnaissance plane tries to sneak up to the Russian border with the transponder turned off all the time. Therefore, air defense forces on duty have to lift our fighter to visually identify the type of aircraft and its tail number," Konashenkov added.

Mission Creep: US Planes Spy on Russia, Complain About Being Intercepted
On Friday, United States European Command (EUCOM) spokesperson Lt. Col. David Westover told Sputnik that Russia carried out an "unsafe and unprofessional air intercept" of a US Air Force RC-135 aircraft over the Baltic region.