Comrades in Arms: ‘Immortal Regiment’ to March Across Paris, Strasbourg 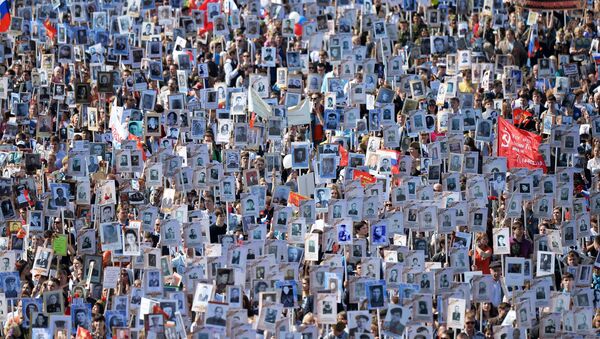 The march of the Immortal Regiment, a public event held in Russia and many countries abroad on Victory Day and commemorating the victory over Nazism, will also be held in the French capital this year.

French Couple Who Sent Medals to Russian Hero's Wife Invited to Moscow
During the event, the participants – many of them relatives and descendants of WWII veterans – march while carrying portraits of those who fought during World War II, honoring the sacrifice of those who made victory over the Nazi Germany possible.

A representative of the march’s organizing committee told RIA Novosti that in 2015 a similar event held in the French capital had attracted about 250 participants, but this year he expects an even greater number of people to take part in the event. He also added that the march will also be attended by the descendants of the French and Italian WWII resistance fighters and servicemen of other militaries, such as the Polish army, who fought against the Nazis.

The Parisian march will start at the Bastille Square: from there the participants will march all the way to the Père Lachaise Cemetery where the event will culminate in a wreath-laying ceremony at the memorial dedicated to Soviet members of the French Resistance.

A similar event is also scheduled to take place on May 8 in Strasbourg under the auspices of the Russian Culture Association of Strasbourg.

According to the event’s organizers, the city authorities initially appeared reluctant to approve the march, but eventually decided to give the 'green light' to the initiative. While so far there are about 100 people who intend to take part in the event, residents of the neighboring French and German cities like Lion, Freiburg and Baden-Baden were also invited to participate in the march.