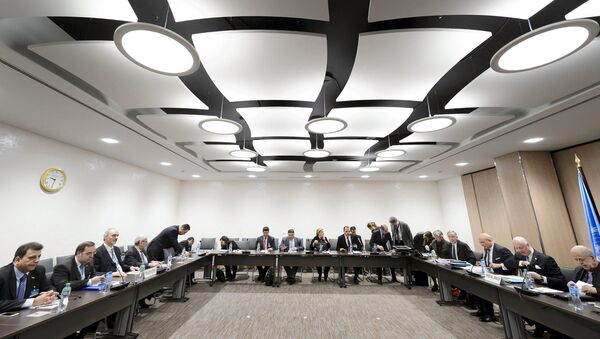 © REUTERS / Fabrice Coffrini/Pool
Subscribe
According to the Russian envoy to UN, the last round of intra-Syrian talks left a positive impression but all delegates need to work harder at the next negotiations, focusing on the political transition in Syria.

GENEVA (Sputnik) – The April round of intra-Syrian talks left an overall positive impression, although it was overshadowed by the suspension of the participation of Saudi-backed High Negotiations Committee (HNC) of the Syrian opposition, Permanent Representative of Russia to the UN Office in Geneva Alexei Borodavkin said.

"The current round left, overall, a positive impression," Borodavkin said, pointing out the importance of the start of discussions on the political transition in Syria and the delegations’ agreement that members of the current government and the opposition must be included in the transitional governance.

Saudi-Backed Syrian Opposition Slams Russia's Call to Expand UN Terror List
During the April round of Syria proximity talks, the HNC walked out over the continuous fighting in Syria and a lack of progress on humanitarian issues.

According to the Russian envoy, the reason why the HNC suspended its participation in the talks is because the delegation "did not bring a worked-out and coordinated position on the issue of the political transition to Geneva."

Next Round of Talks

Moscow expects the May round of intra-Syrian peace talks to include direct meetings between the delegations and insists on Kurds participating in the discussions, according to Borodavkin.

"We expect that after analyzing the results of the current round, there will be another round of intra-Syrian talks in Geneva where we expect direct contacts between the government delegation and the moderate opposition delegation," Borodavkin told reporters.

The Russian diplomat affirmed Moscow’s insistence on the inclusion of Syrian Kurds at the negotiating table.

"This is our fundamental demand, and we believe that this invitation can no longer be put off," Borodavkin stressed.

Moscow to Continue Insisting on Kurds Inclusion in Syria Peace Talks
The Kurdish Democratic Union Party (PYD) claims that Turkey impedes its participation at the talks because of its assumed links to the pro-independence Kurdistan Workers' Party (PKK), which is active in southeastern Turkey and is considered to be a terrorist organization by Ankara.

UN Special Envoy for Syria Staffan De Mistura expressed hope after the April round of Syria peace talks concluded on Wednesday that Kurds would have a voice during future negotiations.

Russia does not oppose a high-level International Syria Support Group (ISSG) session but does not foresee a tangible outcome of the meeting, according to Alexei Borodavkin said.

"We are not opposed to an ISSG meeting in principle. But the event at this level should provide tangible added value. That kind of result is not yet visible," Borodavkin told reporters.

The diplomat concluded that further work was needed to ensure that the gathering of regional and global powers that make up the ISSG co-chaired by Russia and the United States "met the expectations of the international community."

Suggestions to convene a ministerial ISSG meeting have come from a number of figures, including UN Special Envoy for Syria Staffan de Mistura, who stressed on Wednesday that such a meeting would contribute to better adherence to the ceasefire regime in Syria.

UN Special Envoy for Syria Staffan de Mistura will discuss with Russian Foreign Minister Sergei Lavrov on May 3 the results of the latest round of Syria proximity talks in Geneva and prospects of future negotiations between Damascus and the opposition, Russia’s Envoy to the UN Office in Geneva Alexei Borodavkin said.

"There is an agreement that Staffan de Mistura will visit Moscow on May 3 to discuss the results of the latest round of talks and prospects of future negotiations. He will be received by Russian Foreign Minister Sergei Lavrov," Borodavkin told reporters in Geneva.