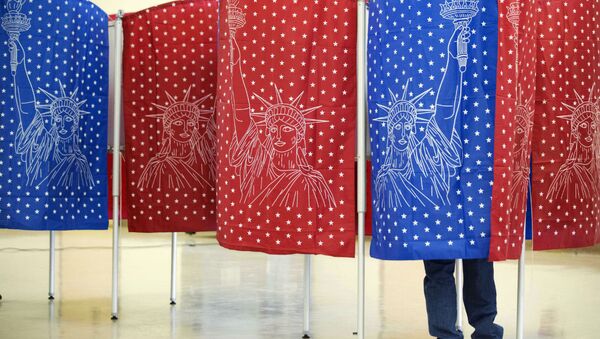 © AP Photo / David Goldman
Subscribe
In the wake of Tuesday’s primary races, a new poll shows that nearly half of Americans believe the voting process to be rigged.

As primary races continue in the United States, many voters have voiced concerns with the nominating process. On the Republican side, billionaire Donald Trump is facing fierce opposition from party insiders, despite winning the vast majority of votes. For the Democrats, supporters of Vermont Senator Bernie Sanders have regularly accused the party of sabotaging his campaign in favor of Hillary Clinton, particularly through the use of superdelegates.

These frustrations have had an effect on American’s confidence in the system at large. According to a new Reuters/Ipsos poll, over half of US citizens believe the primary race to be "rigged."

Approximately 47.2% of those polled agreed that "The current system of presidential primaries and caucuses are 'rigged' against some candidates." Another 29.5% said they were unsure, while only 23.3% disagreed with the statement.

"I’d prefer to see a one-man-one-vote system," said Royce Young, a South Carolinian who supports Clinton. "The process is so flawed."

Part of the problem stems from the overwhelmingly complex nature of both parties’ nominating processes. Varying from state to state, the process can be difficult to follow, and individual states form their own rules about who, exactly, is eligible to vote.

The poll showed that 27% of likely voters did not have a full grasp of the nominating process, while 44% did not understand the need for delegates.

Nearly 71% of those polled said they would prefer to select their party’s nominee with a direct vote, eliminating the delegate process altogether.

Over half also said they would prefer holding all primaries in a single day, rather than spreading them out over several months.

The delegates earned by the candidates on Tuesday all but cement the nomination for the two frontrunners, signaling the beginning of the end of close primary races. According to Larry Sabato, director of the University of Virginia Center for Politics, tight races tend to force voters’ to scrutinize the election process.

"The popular vote overwhelms the rules usually," he said, "but in these close elections, everyone pays attention to these arcane rules."

While Clinton and Trump are likely to be the nominees, rivals in both parties have vowed to continue to the end. The next primary race will be held in Indiana on May 3.

000000
Popular comments
The electoral college is necessary to prevent highly populated states from dominating and controlling thinly populated states. This is illustrated on the state level, where in one case special taxes were levied for a distant flood area, but the money eventually went to the capitol city. The underlying problem with presidential elections is that two private political parties are entrenched in power, along with their respective dynasties, and they dominate/control state primaries. Note how the Colorado Republican party disallowed an open vote in the primary. Foremost, primary nominees are selected to represent the state, not a political party. Therefore, states should take control of the primaries, enact uniform rules, provide a ballot to include all qualified candidates, and provide voting privileges to all state citizens. Thus, from grass roots, nominees are selected from each state to campaign for the presidency. Of course, nothing like this would materialize, because entrenched parties will not allow it.
djkmaon
6 May 2016, 21:42 GMT
000000
Newsfeed
0
New firstOld first
loader
LIVE
Заголовок открываемого материала
Access to the chat has been blocked for violating the rules . You will be able to participate again through:∞. If you do not agree with the blocking, please use the feedback form
The discussion is closed. You can participate in the discussion within 24 hours after the publication of the article.
To participate in the discussion
log in or register
loader
Chats
Заголовок открываемого материала
Worldwide
InternationalEnglishEnglishMundoEspañolSpanish
Europe
DeutschlandDeutschGermanFranceFrançaisFrenchΕλλάδαΕλληνικάGreekItaliaItalianoItalianČeská republikaČeštinaCzechPolskaPolskiPolishСрбиjаСрпскиSerbianLatvijaLatviešuLatvianLietuvaLietuviųLithuanianMoldovaMoldoveneascăMoldavianБеларусьБеларускiBelarusian
Transcaucasia
ԱրմենիաՀայերենArmenianАҧсныАҧсышәалаAbkhazХуссар ИрыстонИронауОssetianსაქართველოქართულიGeorgianAzərbaycanАzərbaycancaAzerbaijani
Middle East
Sputnik عربيArabicArabicTürkiyeTürkçeTurkishSputnik ایرانPersianPersianSputnik افغانستانDariDari
Central Asia
ҚазақстанҚазақ тіліKazakhКыргызстанКыргызчаKyrgyzOʻzbekistonЎзбекчаUzbekТоҷикистонТоҷикӣTajik
East & Southeast Asia
Việt NamTiếng ViệtVietnamese日本日本語Japanese中国中文Chinese
South America
BrasilPortuguêsPortuguese
NewsfeedBreaking
YesterdayPolisario’s Brahim Ghali Vows to Fight Morocco in Western Sahara Until UN Holds Independence Vote
YesterdayUS Afghan Envoy Zalmay Khalilzad Steps Down
YesterdayHezbollah Leader Declares Group Has 100,000 'Trained & Experienced' Fighters - Report
YesterdayUS Large Planes, Early Warning Assets Now More Vulnerable, Pacific Air Forces Chief Says
YesterdayEx-Top Brazilian Diplomat Calls for G20-Led Multipolar World to Tackle Post-COVID Issues
YesterdayBig Tech in 4-Day Winning Streak on Wall Street Sparked By Earnings Bets
YesterdayTrump Says Assault on Protesters Claims ‘Baseless Harassment’ After Hours of Deposition
YesterdayUS January 6 Committee Rejects Steve Bannon’s Refusal to Cooperate in Probe - Reports
YesterdayState Dept. IG Launches Probe Biden's Withdrawal From Afghanistan - Reports
YesterdayScottish Police Reports Powerful Blast in Residential Building in Country's Southwest
YesterdayMoscow Expresses Condolences Over Powell's Death, Says He Was 'A Patriot of His Country'
YesterdayProduction of Russia's Sputnik V in Mexico to Begin in Second Half of November - Reports
YesterdayTreasury to Use ‘Extraordinary Measures’ Through December 3 to Avoid Debt Ceiling
YesterdayTop 10% of Richest Americans Own About 90% of Stocks on US Markets - Report
YesterdayProject Veritas Source Says Asylum Claims to be ‘Fast-Tracked’ Without Congress Oversight
YesterdayChicago Chief: ‘Unvaccinated Cops Face Denied Retirement Benefits’
YesterdayTrump Sues House Panel Probing January 6 Events
YesterdayDOJ Asks US Supreme Court to Re-suspend Texas’ Anti-Abortion Law After Lower Court Drops Ban
YesterdayWhite House Declines to Comment on Report China Tested Nuclear-Capable Hypersonic Missile
YesterdayTrump to Give Sworn Deposition in Mexican Protesters’ Lawsuit