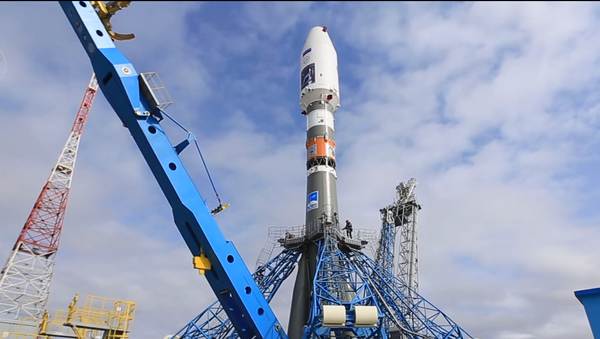 © Photo : YouTube/Roscosmos
Subscribe
“The proof of the pudding is in the eating!” President Vladimir Putin said after a Soyuz spaceship with three Russian satellites on board lifted off from the newly-built Vostochny Cosmodrome in the Far East on Thursday.

All Satellites Orbited From Russia's Vostochny Center Establish Connection
Putin arrived at Vostochny for its first launch, scheduled to take place at 5:01am Moscow time (02:01GMT) on Wednesday. However, automatic systems canceled the launch of the Soyuz-2.1a space rocket less than two minutes before liftoff.

The Soyuz rocket eventually lifted off at 5.01 am on Thursday carrying the Mikhailo Lomonosov research satellite and two small secondary payloads.
Speaking after the launch, Putin, said it could have been carried out on Wednesday, if it was not for the technology "trying too hard."

“They say that the proof of the pudding is in the eating, and to prove that a cosmodrome is ready for work you need to have a first launch. You made it and I congratulate you,” the President said.

“In 2007 we said we were going to have a complex like this and here it is. This is the first stage of a major effort and you have carried it out just fine,” Putin added.

Moscow University rector Viktor Sadovnichy said that the Mikhailo Lomonosov probe would contribute to the scientific study of particles reaching the earth from distant galaxies, powerful flares happening 500 kilometers above the surface of the earth, and keep an eye on the threats from asteroids  and so-called “space junk” orbiting our planet.