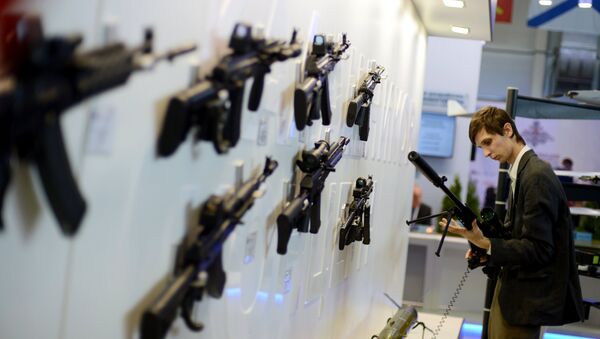 Russia’s largest small-arms maker Kalashnikov Concern hopes to return to the US weapons market as soon as sanctions against the country are scrapped, its director general said Wednesday.

Russia's Kalashnikov Concern to Boost Arms Sales Twofold by 2017
MOSCOW (Sputnik) — Kalashnikov was created in August 2013 through a merger of Russia’s Izhmash and Izhmekh companies. It produces automatic and sniper combat weapons, guided artillery ammunition and a wide range of civilian products, from shotguns and sporting rifles to machines and tools.

The company has been exploring new markets in Africa, Southeast Asia, Latin America and the Middle East after the United States imposed economic sanctions on Russia in 2014, including on its military sector, after a conflict broke out in eastern Ukraine.

"Of course, we’d love to return to the US market but it’s no use speculating about it as long as the sanctions are in place," Alexei Krivoruchko told reporters.