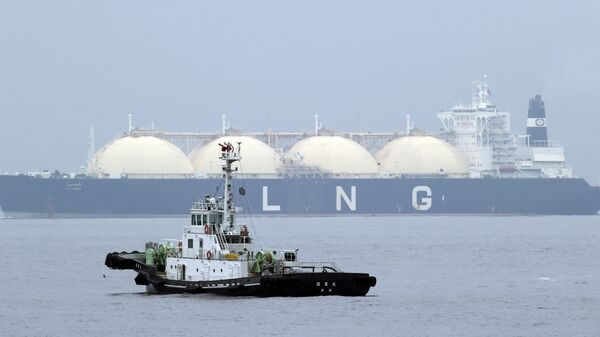 US LNG Becoming 'Less Attractive' to Overseas Consumers
MOSCOW (Sputnik), Anastasia Levchenko — The first tanker with the US LNG is expected to arrive in Portugal Tuesday or early Wednesday under the contract between Houston-based Cheniere Energy and Portuguese Galp Energia. According to the reports, Cheniere also has contracts with several European gas companies, including British BG Group and Spanish Gas Natural.

According to Rui Almeida, energy analyst from Strategy&, part of the PwC network, the Russian energy giant Gazprom may follow the suit of Saudi Arabia that has been keeping oil production high in order to push US shale oil out of the market.

"Gazprom will be faced between losing market share or lowering prices. And Gazprom has publicly said they will defend market share so the bet is on lowering prices. What we may see play out in gas is not dissimilar to Saudi Arabia's strategy in crude market — going for market share, maintaining production to price out higher marginal cost producers namely US oil. We may witness a similar strategy by Gazprom as it protects market share in Europe," Almeida told Sputnik.

First US LNG Delivery to Europe Set to Arrive in Portugal This Week
Almeida continued that such strategy, if applied, will further depress gas prices and in particular undermine the economics of US LNG exports to Europe.

Most impact from the US LNG is likely to be felt in Europe in 2018 and onward, when US producers might have captured a significant market share.

Stuart Elliott, Platts analyst on European gas and LNG, also notes that the traditional gas suppliers are boosting the output as a reaction to the US firms entering the EU market.

"US LNG gives gas buyers in Europe an alternative to their traditional suppliers such as Russia, Norway and Algeria… The response from those producers so far has been strong – Russia has promised more flexibility in its long-term contracts and has been pumping gas to Europe at full blast, while Norway and Algeria have been pushing as much gas onto European markets as they can," Elliott told Sputnik.

At the moment, buying LNG from the United States is costly for Europe. Those companies that buy US LNG are now fulfilling previous long-term contract obligations, Viren Doshi, analyst at PwC's Strategy& oil and gas leader, said.

"Gas prices are linked to oil. And oil prices come down. As a consequence, gas prices are coming down already. It makes it very unprofitable to pay LNG shipping costs, as well as liquefaction costs. It looks very uneconomical for Europe, but at the time they signed contracts, they didn’t know that oil price was going to decline to 30-40 US dollars," Doshi told Sputnik.

European gas markets will continue to be dominated over the next years by defined or inflexible supply (long term contracts and domestic production) at 70-80 percent range of total supply, according to PwC experts.

Washington has long been arguing for the geopolitical importance of LNG exports to Europe, saying it would help European allies decrease dependence on Russian energy imports. The cost of shipping natural gas from the United States to Europe remains high and requires sizable infrastructure investments.