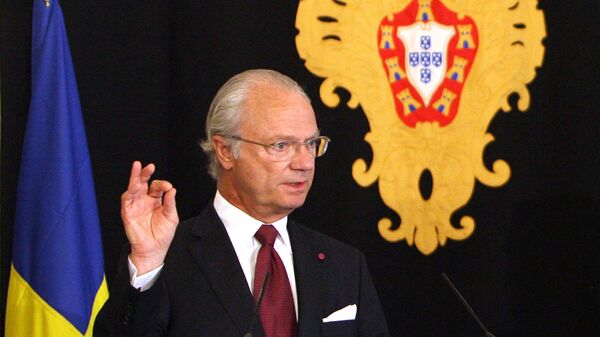 "Poor track of facts and constant ridicule." King Carl XVI Gustaf of Sweden is highly critical of the media's focus on the Royal family and himself, he admitted in SVT's upcoming program "70 King Years: a Lonely Majesty."

Unwelcomed Ruler? Swedish Royal Baby Sparks Heated Monarchy Debates
In an hour-long program (to be broadcast April 28 on SVT1 channel) King Carl XVI Gustaf of Sweden addressed a number of problems, such as his grandchildren, environment and the refugee situation. However, perhaps, the most outspoken replies dealt with the Swedish media's unsolicited focus on his own person. King Carl XVI Gustaf claims to see a tendency for journalists to make fun at his expense, which both hurts and burdens him.

"If you always get ridiculed in the media, it becomes very difficult to work. I have worked as hard as I have been able as regards my abilities and my power, says the King of Sweden, who claims to "feel it with his heart."

"You have to be able to imagine how another person feels, as you do not always understand. It's like any contact whatsoever: when you meet a person, you treat him or her with respect," Carl Gustaf argued, stating that the media's bias against the Royal family makes him "angry, irritated and sad."

Royal Pain in the Neck: Norway's Royals Twice as Pricey as Thought
The King deplored the idea that the present-day high-speed media keep bad track of the facts and went all-out against blogging and popular media.

"In the past, only newspapers contributed with written material. Something that was written disappeared with the newspaper's circulation. But today everything is picked up by bloggers and keeps running around in infinite loops. They don't care to check the background or put things in a larger context, they just read some odd statements and then take advantage of hem. This is very dangerous, I think," he said.

No particular examples of disjointed or otherwise misused quotations were addressed in the interview. Nevertheless, the King stated that he would like to see stronger source control in the stories about himself and his family.

"All claims must have relevant background and facts. If you just pick some loose facts you happened to have come across and set them together in your own imagination, it may grow beyond recognition. I think that this is the danger with this kind of information society. Everything is going too fast and nobody checks their facts," he said.

This European Country Has Huge Problem With Press Freedom
Karin Lennmor, executive editor of the Swedish women's magazine Svensk Damtidning disagrees with the King's take on the media: "It is an exaggerated picture," she told Swedish Television.

"I don't think it is right. Sure, some quotes and videos where the King expresses himself oddly have been published, but this can hardly be perceived as ridicule. Given what he says and how he acts, there is actually a lot more to make fun of. I rather think that the media are very restrained," she said.

Reporter Bengt Hansell, who monitors the Royal House for Swedish Radio's Ekot program, does not concur with the Kings image of journalism either. In an interview with Hansell 20 years ago, the King spoke about his dyslexia. He admitted that he had never undergone proper media training at a young age, something he lacked in retrospect.

Hansell could only remember two occasions that may have been perceived as mockery. Once, the King made an official appearance and was about to write his name on a mine wall in Falun, but failed to spell it correctly. The other time was when he began his address in the town of Arboga "dear inhabitants of Örebro." It is possible that this left deep scars, he argues.

Why do our presidents have to be so formal why can't they be like the king of Sweden pic.twitter.com/waODAEnt7r