If Brazil’s Rousseff Impeached, Politician Despised by 99% Will Take Over 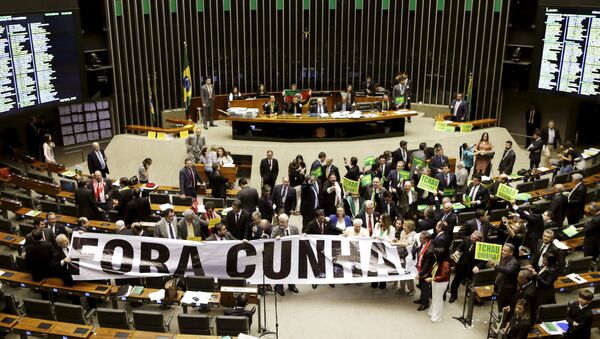 Prospects look bleak that Dilma Rousseff and the Worker’s Party will be able to survive the slow motion political coup which means Michel Temer’s unpopular and unelectable austerity platform will soon assume control of the country.

On Sunday, Brazil’s Senate formed a special committee to determine whether to advance with impeachment proceedings against President Dilma Rousseff following a majority vote in the lower house suggesting impeachment. If the Senate determines to hold a trial of Brazilian President, her term will be suspended for 180 days pending an impeachment vote.

Opponents of the impeachment proceedings argue that they are nothing more than a coup attempt by conservative and center right elites from the minority parties. The basis for this concern is that, in the absence of President Dilma Rousseff, her political opponent and current Vice President Michel Temer will assume authority – the people will have a government radically different than the one they elected.

The roots of the impeachment proceedings also instigate further suspicion. The “car wash” investigation, from which Rousseff’s impeachment is derivative, began after the NSA spied on Rousseff, members of her cabinet, and leaders of the Brazilian state-owned oil company Petrobras with those documents finding their way into the hands of Brazil’s judiciary.

Even so, Rousseff’s impeachment is not based on accepting kickbacks as was the case with the attempted prosecution of Worker’s Party founder and former Brazilian President Lula de Silva. Rather, the basis for impeachment is that Rousseff inflated the country’s economic outlook by using in public disclosures which nonetheless included source materials and formulas for deriving those figures.

Loud & Clear’s Brian Becker sat down on Monday with Brazilian journalist Pepe Escobar to talk about the developing impeachment proceedings against Rousseff and to ask whether this is simply a coup orchestrated by wealthy elites to discard the needs of the country’s poor.

​What is happening in Brazil’s Senate?

Escobar explained that starting on May 11, according to official estimates, the Senate should have proceedings prepared forcing Dilma Rousseff out for 180 days while the Senate deliberates her fate.

Escobar blames what he sees as a coup on Eduardo Cunha, the leader of the lower house, who has been identified as having 11 offshore shell accounts in Switzerland, was implicated in the Panama Papers, and is currently under investigation by the Brazilian Supreme Court for a $5 million kickback scheme.

Although the coup continues against Rousseff, Escobar has little hope that Cunha’s actual corruption will be prosecuted. "The Supreme Court doesn’t have the balls to investigate Cunha because the judiciary does not want to interfere with the legislature’s powers even though the legislature is interfering with the executive."

How will a Temer Presidency be different from a Rousseff Presidency?

"For the past two decades, the Workers Party has been winning elections and Dilma won the vote of 52% of the people or 54 million votes," started Escobar. "The rightwing and center right elites decided that they will not accept the Worker’s Party again so the very corrupt are impeaching an innocent person for corruption."

By contrast to the popular support that Rousseff and the Worker’s Party have among the Brazilian people, a Temer administration would be one of the ruling interests rather than the people.

"Temer’s index of rejection in Brazilian polls, with the Brazilian people, floats around 98% to 99%," said Escobar.

Escobar explained that Temer’s allies are already organizing to institute substantial, largely worrying reforms once they assume power. "They are going to bring a neoliberal for finance minister, of course, that is a given. Temor has been talking about this with the agribusiness in central Brazil, the big businesses in Sao Paolo, and the Washington neoliberals."

Specifically, Escobar anticipates that a government led by Temer will institute harsh austerity measures along with raising interest rates so that those who are indebted must pay more. "This will be bad for the Brazilian economy and they also want to cut expenditures by freezing salaries, cutting education, cutting healthcare, cutting the social safety net in Brazil to extinction," speculated Escobar.

The journalists closed by noting that the developments inside of Brazil are not solely domestic, but are also driven in large part by US cooperation in an attempt to undermine the BRICS economic union – Brazil, Russia, India, China, and South Africa. "The target is the BRICs and they tried with the Ukraine crisis, the Ruble crisis, the oil price war the US pushed on Saudi Arabia, and the South China Sea flare up," elaborated Escobar.