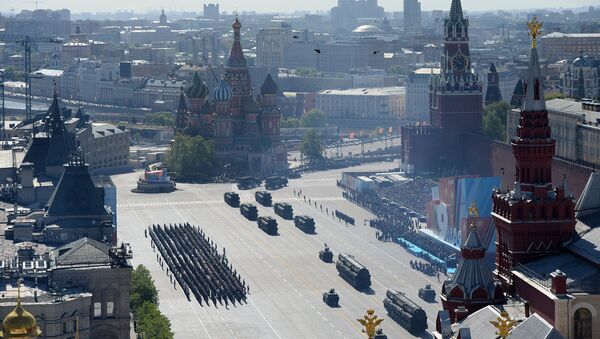 © Sputnik / Alexander Vilf
/
Go to the photo bank
Subscribe
The Magues, a retired couple from the French city of Florensac who gave their own WWII-era medals to the family of Alexander Prokhorenko, have been invited to attend the Victory Day Parade in Moscow, according to RT.

Last week, the Mague family sent two military medals that belonged to their family to the family of Alexander Prokhorenko, a Russian soldier killed in Syria during the liberation of Palmyra.

One of the medals is the Legion of Honor and the other the War Cross with Bronze Palm Leaf. The medals were given to family members of the Magues who fought against Nazis as part of French resistance groups during World War II.

"We give you the medals of our family… we think it would be a good thing to return them to his [Prokhorenko's] family," the Mague couple said in a letter sent to the Russian Embassy earlier this month.

French Couple Sends WWII Medals to Wife of Russian Soldier Killed in Syria
Following the extraordinary friendly gesture from the Magues, Russian Ambassador to France Alexander Orlov visited the couple and invited them to attend the Victory Day Parade in Moscow on May 9.

Orlov brought the Magues a personal invitation from Vladimir Putin, who, according to RT, would like to meet the French couple while they are in Moscow.

The Magues were honored by the invitation. Jean-Claude Mague asked if he could personally meet the father of Alexander Prokhorenko.

"I told the ambassador that I'd like to meet with the father of Alexander and give him my medals to honor his son, because he's a real hero," Jean-Claude Mague told RT.

Alexander Prokhorenko, the 25-year-old Russian lieutenant, was killed during the military operation to liberate the ancient city of Palmyra from Daesh terrorists as he was providing intelligence and coordinating Russian planes to attack targets in the city. During the operation, Prokhorenko's position was discovered and he was surrounded by terrorists. To avoid being captured, possibly tortured and interrogated, the young man called an airstrike on his own position.