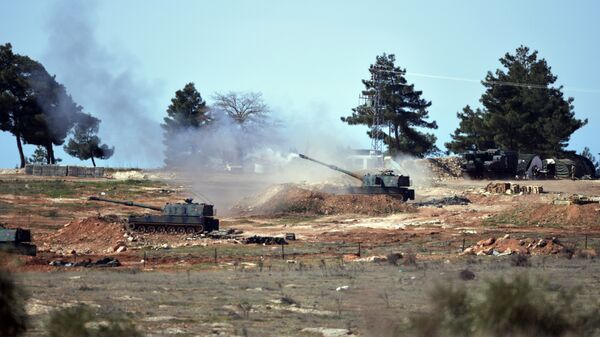 The Turkish army has pulled additional forces to the border with Syria, placing several rocket launchers near the Turkish city of Kilis, local media reported.

Turkey Prevents Kurds From Taking Part in Intra-Syrian Peace Talks
According to a military source, Turkish authorities have sent 13 trailers with military equipment to the southeastern regions of the country in order to strengthen its military capacities on the Syrian border, Anadolu agency reported.

Earlier, Ankara and Washington struck a deal to deploy American light multiple rocket launchers (MRL) on the Turkish border with Syria in order to fight against Daesh, according to the head of the Turkish Foreign Ministry Mevlut Cavusoglu.

The missile systems are expected to be installed in the border area in May.

"Our artillery has a maximum range of forty kilometers, that the US MRL is ninety kilometers. Our main goal is to clean up the 98-kilometer stretch of our border from the IS [Daesh], and afterwards the security zone will form by itself," Cavusoglu told Turkish media.

In recent weeks, the Turkish city of Kilis has been shelled several times from the territory of Syria, which is currently under control of Daesh terrorist group. As a result of the bombings, ten people died, and forty were injured.

Daesh is a terrorist group outlawed in the United States and Russia among other states. The group has seized large areas in Syria and Iraq and declared a caliphate on the territories under its control.