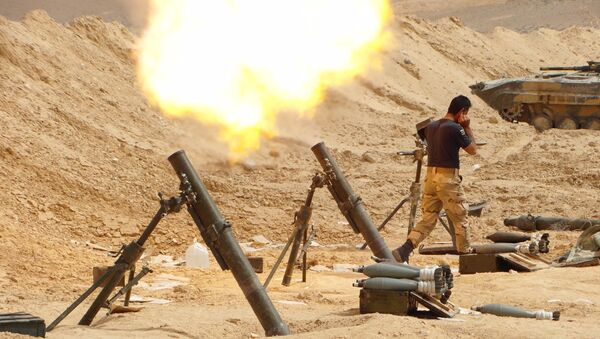 US Secretary of State John Kerry wants to draw "absolute" lines across Syria to create the Western "areas of influence" there. Such an approach resembles nothing so much as neo-colonialism, experts say.

The idea to create spheres of influence in Syria voiced recently by US Secretary of State John Kerry clearly indicates that Washington continues to pursue its Plan B in Syria.

In his interview with The New York Times editorial board Kerry narrated that the White House proposed to draw clear lines in Syria to the Kremlin.

"We've even proposed drawing a line, an absolute line, and saying, 'You don't go over there, we don't go over here, and anything in between is fair game.' And they are considering that, and I think we will get there in the next week or so," Kerry told the editorial board.

Russia’s 'Intervention' in Syria Splits US Administration
However, according to the Russian Foreign Ministry, such an approach is oversimplified.

"This approach is slightly simplistic. The principal goal is to fight against terrorism [in Syria]," Russian Foreign Minister Sergei Lavrov said during a press conference on Monday, as quoted by RIA Novosti.

It should be noted that Kerry's 'offer' followed the Saudi-backed High Negotiations' Committee (HNC) decision to suspend its participation in the Geneva talks on April 21.

On that day most HNC members left Geneva in protest against the ongoing violence in Syria which they blindly blame on Damascus.

The HNC is well-known for its anti-Assad stance. However, by no means the entity represents the Syrian opposition as a whole. The HNC brought together Saudi-backed rebels in Syria, including notorious Ahrar ash-Sham and Jaysh al-Islam groups which actually share the same Islamist ideology as Daesh and al-Qaeda's affiliate al-Nusra Front.

Syrian Elections: Washington Unable to Strangle Assad's Legitimacy
A day after the HNC demarche Lavrov called attention to the fact that besides the HNC there are also the Moscow and Cairo groups, Hmeymim group and the group of independent opposition members which express their willingness to continue the dialogue with Damascus over the situation in Syria.

"Some people have already left [the Syrian opposition's] High Negotiations Committee [HNC]. They disagreed that radicals ruled the committee, including Jaysh al-Islam leaders. This fact confirms that we were right while proposing to include it in the list of terrorist groups… This group, as well as Ahrar ash-Sham are actively proving in action that they fully support those anti-humane, brutal approaches used by Daesh and Jabhat al-Nusra [al-Nusra Front]," the Russian Foreign Minister underscored.

According to Elena Suponina, President of the Center for Asia and the Middle East at the Russian Institute for Strategic Studies, John Kerry's offer to divide Syria into spheres of influence with Russia means that Washington now regards Moscow as an equal player in the Middle East.

In her Op-Ed for RIA Novosti Suponina recalls, that four years ago the Obama administration did not even bother to take Russia's interests in the region into consideration.

However, in general, the White House continues to demonstrate a double-standard approach toward Syria and other regional players, according to the expert.

"It looks as if the colonial epoch and the times of re-division of the world by global powers have returned" Suponina writes, calling attention to the fact that Western policy-makers (most notably John Kerry himself) have repeatedly claimed that it is highly inappropriate to behave "in 19th-century fashion" in the 21st century.

And now Kerry proposes to draw "absolute lines" across the Middle Eastern region, she remarks, warning that Syria is "only the beginning."

Kerry's "fair game" in Syria will most likely prompt more destruction and devastation. Is Washington ready to take responsibility for chaos in the region?

On the other hand, Kerry's proposal looks rather controversial since it was Russia, not the US that was invited to Syria by the legitimate Syrian government.

"Genuine peace still looks a way off and it looks like the Western nations still hope to implement the Libyan scenario in Syria… They use the war with Daesh as just a means of building large coalitions, but if you look at the previous such campaigns you will see that our American 'partners' rarely practice what they preach," Kamkin told Radio Sputnik.

Hans-Christof Von Sponeck, former UN Assistant Secretary-General, expressed his concerns regarding the fact that Washington continues to conduct a "series of experiments" in Syria.

"The Americans are never short of experiment, never short of trying something new… It is jumping from one laboratory test to another, and in the meantime the country continues to go further towards a destroyed nation," Sponeck told Russia Today.

Interestingly enough, it seems that there is no concordance in Washington regarding what to do next in Syria.

US President Barack Obama said Sunday that he does not support the idea of creating so-called "safe" or "buffer" zones in Syria as it would need Washington's deeper military involvement in the region.

At the same time, Obama has signaled that 250 US Special Operation Forces troops will be soon deployed in the war-torn country.