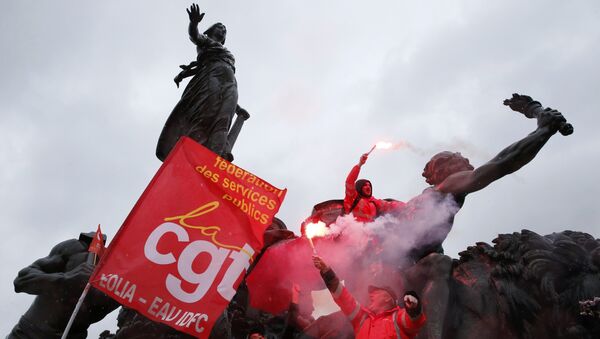 © REUTERS / Benoit Tessier
Subscribe
Workers in France, Germany and Britain have joined others across Europe in a series of strikes amid bitter discord as the economies of Europe struggle to show strong growth years after the global financial crisis.

Railway workers in France Tuesday (April 26) staged the latest in a string of walkouts in a dispute over pay and working conditions. Employees of French state-owned rail company SNCF staged its latest walkout on Monday night and will not return until Wednesday, leading to half of its high-speed TGV services and a third of its Intercity trains running.

Once again, rail transport in France is disrupted by a national strike. (en français) https://t.co/rZmt48ypWR pic.twitter.com/WA2hrBYqss

The walkout is being backed by all four unions: the UNSA, CGT, SUD and CFDT and is the result of a long-running dispute between SNCF and the unions over workers' pay and working conditions. There have been a series of national strikes in France, opposing French President Francois Hollande's proposed reforms to labor laws. 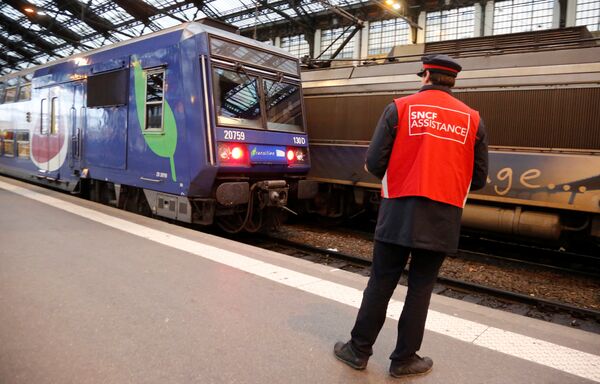 Over a million people took part in protests in early April over the labor reforms that many claim will allow employers to sack people more easily. The reforms were largely directed at making companies take on more workers on permanent contracts, rather than temporary ones, to bring down the unemployment rate from ten percent. The proposals would give employers more scope to lay-off workers and cut costs and allow some employees to work far longer than the current 35-hour week.

UK Health on the Line: Gov't Gives Doctors 'No Other Option' But to Strike
Meanwhile in the UK, junior doctors in hospitals in England took the unprecedented action of walking out for two days, leaving critical areas — such as Casualty, Maternity and Pediatric departments — without junior doctor cover. After a series of strikes in recent months, this is the first time they have withdrawn all cover.

The dispute is over the UK Government's election commitment to commit to seven day working within the UK National Health Service. The government wants to extend the hours that are paid at the basic rate by two hours weekdays and to include Saturday daytime. The doctors are currently paid extra for working weekday nights and both days at the weekend.

In Germany state carrier Lufthansa has said The Verdi union has called for token strikes in the areas of ground handling, passenger checks and (partly) airport fire services at Frankfurt, Munich, Düsseldorf, Cologne/Bonn, Dortmund and Hanover airports on Wednesday (April 27).

@suzelknight Sorry that your flight was cancelled due to the Verdi workers union. My colleagues are doing their best to assist. /Adam

"The strike called by the Verdi union confirms once again the urgent need for certain 'rules of play' on industrial action in the aviation field. We want to see binding mediation or conciliation procedures here before such strike action can be taken," said Dr Bettina Volkens, Chief Officer Corporate Human Resources & Legal Affairs of Deutsche Lufthansa AG.

"Once again, our travelers will be affected by industrial action that is being taken in connection with collective bargaining negotiations in which Lufthansa is totally uninvolved. This is a clear case of using aviation for token strikes because of its high media profile, and even though the associated negotiations will be continued the very next day."