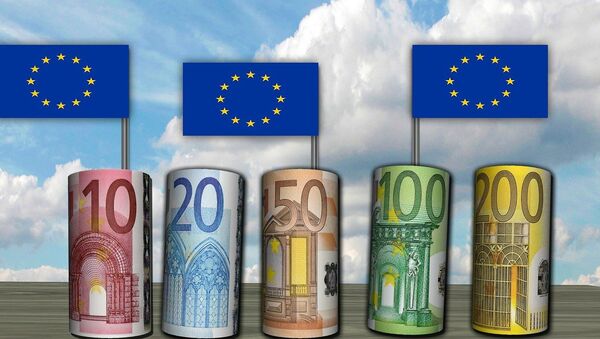 Neil Clark
All materials
Could the #PanamaPapers scandal help tip the scales in Britain's EU Referendum vote in favor of Brexit?

How 'Unparliamentary': MP Suspended for Calling UK PM 'Dodgy Dave'
Prime Minister David Cameron's ratings have taken a tumble since it was revealed that his late millionaire father Ian had set up an offshore fund in Panama, which Cameron himself profited from.

And the slump in 'Call Me Dave's' popularity did seem to affect people's planned voting intentions on 23rd June, if subsequent polls, which showed 'Remain' and 'Leave' running at neck-and-neck, were to be believed.

At first it seems strange that revelations about tax dodging in a Central American republic would influence how people would vote in a referendum on whether Britain should leave the EU. Let's be honest: it's hard to see how the European Union — which can be blamed for quite a few things — can be held responsible for what's been going on in Panama. 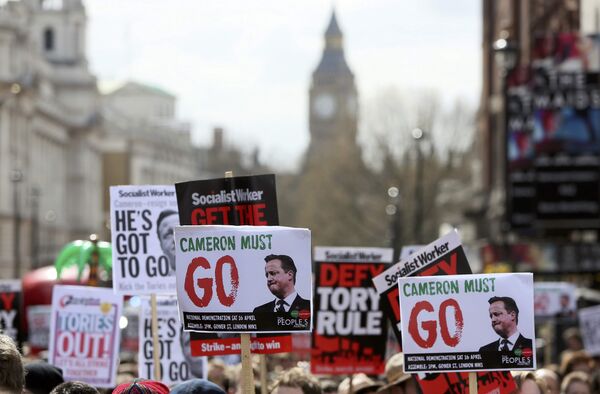 If we looked at the matter objectively, sans Euroskeptic or Europhile glasses, then we would acknowledge that it's the City of London and British Crown Dependencies and Overseas Territories which are at the very heart of the global tax avoidance system.

After Hong Kong (which don‘t forget was a British Dependent Territory until 1997), UK firms figure more than the firms of any other countries in the Panama Papers. All in all, 1,900 British firms feature, and more than half of the 300,000 firms believed to have used the services of Mossack-Fonesca are registered in British overseas territories or Crown dependencies.

The role of British banks, such as HSBC, Rothschild and Coutts in helping the rich stash their gains away in tax-havens has also been highlighted.

If we're angry about global tax avoidance by the super-rich, then our anger should be primarily directed at politicians at home in Britain — and not at the EU.

We also need to note that in 2013 David Cameron personally intervened to prevent offshore trusts, such as the one his millionaire father had set up in Panama, being included in an EU-wide crackdown on tax avoidance.

In a wider sense however, it is perhaps understandable that #PanamaPapers are helping the Brexit campaign.

This is not just because 'Call Me Dave', the most important public figure backing 'Remain' has been exposed as a brazen hypocrite. The Panama leaks vindicate the positions taken by populist, anti-globalization campaigners. As Leo McKinstry — anti-EU columnist with the Daily Express, put it:

"The fact is that this controversy feeds perfectly into the anti-establishment, Brexit narrative that we are governed by a privileged elite that has no connection to the mainstream public.

"Indifferent to national interests, these elitists adore globalization because it enables them to transfer their money easily round the world while trumpeting their devotion to openness."

The Panama Papers leaks reveal the greed of the global elite in a time of turbo-globalization. And the fact that the EU is seen — rightly or wrongly — as an organization which serves the interests of the elite, helps the Brexit cause.

However, things are not really as clear cut as they may first appear. UKIP is Britain's leading anti-EU party.

It calls itself 'The People's Army'. But, as the Daily Mail's chief political correspondent Peter Oborne noted, the usually very vocal Nigel Farage, leader of UKIP, has been rather quiet about the Panama Papers revelations

Farage, a former City stockbroker, has admitted that he had a trust himself on the Isle of Man but said he had never used it. He also expressed concern about politicians being asked to publish their tax returns.

Since the #PanamaLeaks scandal broke Farage has made not one single comment on it. Why?

There is, it must be said, a 'Red' faction in UKIP, who would like to see the party ditch neoliberalism and pursue more majoritarian economic policies like nationalization. This faction, would I'm sure, in common with many UKIP voters, like to see the party go for Cameron's jugular on the Panama Papers/tax avoidance issue. But Farage, for whatever reason, doesn't seem keen to do so.

Peter Oborne, who himself is a Euroskeptic, argues that the #PanamaPapers could actually help the 'Remain' side because of UKIP's weak position on tax havens.

UKIP's stance is in sharp contrast with that of Labour — who have landed some good blows on Cameron over Panama and the subject of tax generally.

Leader Jeremy Corbyn said that Cameron had "misled the public" and "lost the trust of the British people."

Labour is taking a tough line on tax avoidance — they have called for the government to consider imposing "direct rule on UK overseas territories which don't observe UK tax law," but the party is lining up with most of the ruling class in supporting Britain staying in the EU.

"One rule for the super rich and another for the rest" — my response to @David_Cameron's statement on #panamapapershttps://t.co/XWclrxSzlM

Jeremy Corbyn, who has spent much of his political career criticizing and opposing the EU, said, in his first major speech of the referendum campaign, that staying in the bloc was the most viable way to "protect social and human rights, tackle climate change and clamp down on tax dodgers."

Take note of those last five words: "Clamp down on tax dodgers." This was an obvious attempt to bring Panama into the debate.

We'll have to wait and see what impact Corbyn will have on the 'Remain' campaign.

One thing we do know though. Unlike 'Call Me Dave', 'Jezza's' ratings are on the up.

In a recent poll, the Labour leader's approval ratings passed Cameron's for the first time.

Ten days ago, a YouGov poll showed that public trust in Cameron had fallen eight points.

Meanwhile, on 16th April, over 150,000 people marched in London to demand Cameron's resignation. 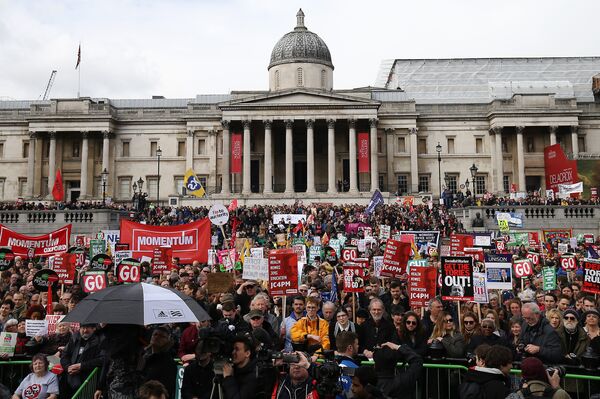 Protesters with placards and banners demonstrating on a variety of domestic issues including a call for British Prime Minister David Cameron to stand down, organised by the People’s Assembly Against Austerity, listen to speeches in Trafalgar Square after marching in central London on April 16, 2016.
© AFP 2022

Cameron said he'll stay on even if 'Remain' loses the vote in June, but no one believes this. For a more accurate assessment we only need to turn to 'Big Beast' Ken Clarke, the former Tory minister who said that Cameron "wouldn't last 30 seconds if he lost the referendum."

The greatest irony of all would be if the British Establishment — which by and large wants us to remain in the EU — is saved by a man — Jeremy Corbyn — who they've spent most of the past year attacking and smearing.

The most recent polls show the 'Remain' side forging clear again, indicating that perhaps the #PanamaPapers controversy has blown over.

But it's premature to say that Cameron is out of the woods on this issue and the pressure on him is likely to continue.

The #PanamaPapers could still be decisive, but if the leaks are to help Brexit, and not end up boosting 'Remain' because of Corbyn‘s tough line, Euroskeptics need to start making a much bigger noise about offshore funds and the unfairness of the current system.