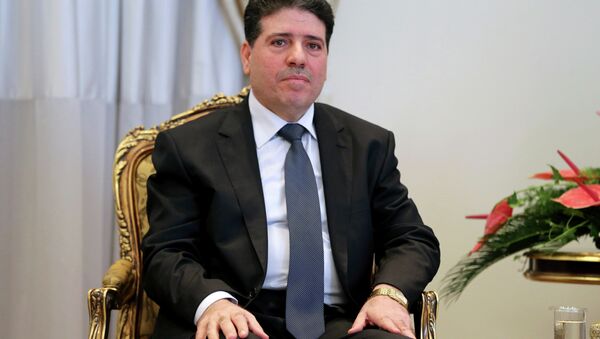 © AP Photo
Subscribe
International
India
Africa
Syrian Prime Minister said that Syria and Russia are considering the possibility of setting up joint banks to carry out transactions between the two countries.

"At the moment, there is a discussion at the Central Bank of Syria on the most appropriate form for the creation of a Russian bank in Syria, in order to ease the financing of banking transactions between the two countries, which serves mutual interests and will simplify trade," he added.

Syria and Russia are holding consultations on the possibility of transactions in their national currencies Wael Nader Halqi said.

“Back in 2013, the Central Bank of Syria prepared a detailed bank mechanism on the exchange [of goods] in national currencies and presented it to the Russian side to a representative of the Russian Central Bank’s head. Several rounds of negotiations were held on this mechanism. We were told that consultations with Russian banks were ongoing. Work on examining this issue, as well as the issue of cooperation with Syrian banks in this is still ongoing. Soon we will be told the names of these banks,” Halqi said in an interview.

According to Halqi, the topic was also reflected in a memorandum that the Syrian side presented to the members of the Customs Union, which later turned into the Eurasian Economic Union.

"Yes, we will request help from friendly countries. As for the amount — restoring the country requires a lot of funding, this will depend on the position of the country wishing to take part in this and invest. Industrial investments in important projects can be carried out either with the full funding of the state or partially through established investment forms, such as, for example, open credit lines in accordance with the financial needs of the social and service sector, loans on favorable terms.. It is impossible to calculate the required amount, as we first and foremost ask friendly countries to be financially involved in accordance with their capabilities," Halqi said.

"[The aid] has a major impact on meeting citizens' basic needs and supporting vital sectors. This regards rescue and humanitarian activities. As for the strategic period, the aid will be provided in the form of financial investments, which the Syrian government plans to get from friendly states in the form of concessional loans to finance investment projects in strategic fields, most importantly energy, infrastructure, industry, agriculture and others," he added.