Serbia's New Reality: What Election Result Means for Serbs, and for Moscow 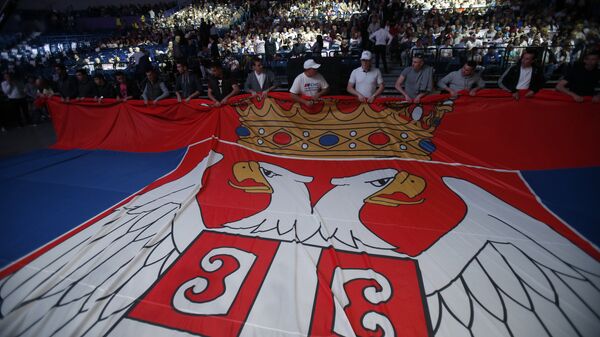 As expected, Sunday's snap parliamentary elections in Serbia saw victory for supporters of European integration. Russian political analyst Gevorg Mirzayan summarizes the elections' implications for Serbia, and for relations between Belgrade and Moscow.

According to preliminary estimates, the electoral coalition formed around Prime Minister Aleksander Vucic's Progressive Party won about 50% of the vote, with Foreign Minister Ivica Dacic's Socialist Party coming in second, with about 13%. The anti-EU Radical Party came in third, with 8%, clearing the 5% threshold for entry into parliament. The leaders of several parties that failed to reach the threshold have launched complaints about vote rigging.

A total of 3,270 candidates from 20 political parties and electoral coalitions participated in the contest for Serbia's 250-seat National Assembly. The final results will be announced in the next few days.

Serbian PM: Progressive Party’s Victory to Fast-Track EU Integration
Commenting on the election results, Expert magazine contributor Gevorg Mirzayan explained there are signs that Serbia will attempt to continue its multi-vector foreign policy course. The main question, he suggests, is whether this will actually be possible.

"On the one hand, this course implies an unconditional line toward joining the European Union, with both Vucic and Dacic advocates of European integration. Another element will be [the continuation of] policy in favor of maximum association with NATO – that is, rejection of formal entry into the alliance, combined with the highest possible level of cooperation."

"It's true, some experts believe that joining NATO is a de facto prerequisite for accession into the EU, but Serbs, understandably, are not ready to join an organization which led several wars against it in the 90s, and provided direct assistance in the business of breaking up Yugoslavia. It's most likely that this convergence will take place gradually – the early elections themselves came about after Serbs took to the streets following the ratification of another agreement with the alliance."

Sooner or Later, Serbia Will Have to Make a Choice: NATO or Russia
"Undoubtedly," Mirzayan writes, "Vucic and Dacic should expect even more serious protests, and not only over the measures to reduce social spending that will be required under the agreement with the IMF. At some point, the Serbian government will have to decide what to do with Kosovo. Right now, the Euro-integrationists, giving up their president and their generals, continue to maintain that Kosovo is an integral part of Serbia. However, to enter the European Union, Belgrade will have to recognize the region's independence – 'special conditions' on the question of its sovereignty are out of the question."

"It's possible that the Euro-integrationists are hoping that in time – while negotiations continue, Serbs will come to terms with the idea that Kosovo has become an independent territory. For this reason, both Brussels and Belgrade will postpone, as much as possible, the Kosovo dilemma; it should be decided as the last or next-to-last step prior to the country's accession to the EU."

Ultimately, the analyst notes, "if the social mood changes, there will be a referendum. If not, there will be a decision at the executive level (along the lines of the Montenegro case, where the head of state recently decided to take his country into NATO, in spite of popular attitudes)."

Alleged Ex-Bandit Thaci Inaugurated as New President of Kosovo
"In this situation, Belgrade will have to dismiss its claims not only over Kosovo, but also over support for Serbs in the region around Kosovska Mitrovica," the ethnic Serb-populated municipality in northern Kosovo.

"Densely concentrated in the north, and having a common border with Serbia, these ethnic Serbs refuse to submit to Pristina, and today may be the most striking embodiment of the Serbian national spirit. However, if Belgrade establishes real border controls and stops supplying them with the necessities (from food to electricity) the inhabitants of this territory will have a very difficult time maintaining their independence."

At the same time that it seeks to join the European Union and dialogue with NATO, Belgrade will also attempt to build relations with Moscow. "Today's Serbia needs Russia not only for economic reasons (Serbian companies are active in the Russian market, particularly in the export of food), but politically as well."

This, Mirzayan notes, stems from the fact that Serbia's leaders understand that the EU fears Russia using the country as a foothold in the region. The hope, he notes, is that "the EU will be wary of excessive convergence between Serbia and Russia, and will therefore become more tolerant and supportive of the Serbian leadership, perhaps providing some additional financial support, or accelerating Serbia's entry into the EU."

Serbia EU Entry Hinges on Compliance With Political Criteria
At the same time, "in negotiations with Russian authorities, Foreign Minister Dacic will recall the 'Russian-Serbian brotherhood', and will hint at a willingness to intensify political cooperation in exchange for investments."

"Meanwhile, Serbian Radical Party's Vojislav Seselj's election [as an MP] will somewhat complicate the prime minister's game. And it's not even about the fact that the opposition now has a brilliant orator in the assembly, or that Seselj enjoys significant support among the population…It's more to do with the fact that Russia traditionally does not like multi-vector policy."

"Until recently," Mirzayan recalled, "Moscow found itself in a desperate situation in the Serbian field; the country lacked a concrete anti-EU opposition, and President Tomislav Nikolic was only conditionally pro-Russian, and had little decision-making authority. Now, the unconditionally pro-Russian Vojislav Seselj has emerged. Yes, with only 8 percent of the vote, but he is an understandable and pleasant partner for Moscow. And it's possible that Aleksander Vucic will now have to compete for attention and support from Russia."