Do You Need to Tip? World’s First Drone Café Opens in Holland 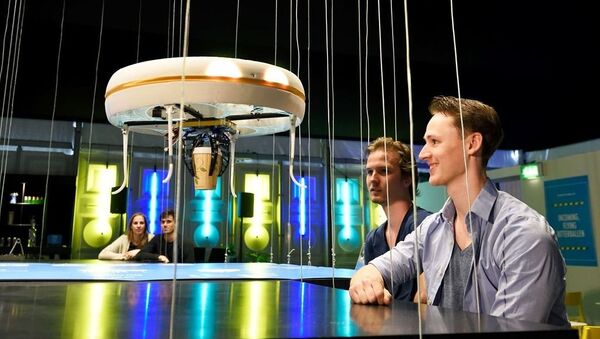 © AFP 2021 / EINDHOVEN UNIVERSITY OF TECHNOLOGY/BART VAN OVERBEEKE
Subscribe
Can you imagine drones being part of our everyday life, flying around our homes and helping out with everyday tasks? Students at a Dutch university have opened the world’s first drone café, where a drone called Blue Jay acts as a waiter, in an effort to show people what they want from the future of robotics.

Students from the Dutch Eindhoven University of Technology have opened the world’s first drone café on their campus.

The drone, nicknamed Blue Jay, which resembles a small white flying saucer with a luminescent strip for eyes, flies to a table and hovers as it takes a client's order, who points to the list to signal what they would like.

"The blue eyes of the first drone load" up by scanning the list to register the order, student and project leader Tessie Hartjes told AFP.

"Once it's fully loaded, then the order is ready. And another one comes with the order in a cup in the grip."

The cafe offers four different alcoholic and non-alcoholic cocktails, which are either bright blue or green – the same color as the drone's "eyes."

The drinks are picked up and carried by a set of pinchers underneath the drone, in a bid to show that these hovering robots can be used to carry out delicate missions such as delivering medicines or even helping to track down burglars.

In their video presentation, the students explain that the aim of the project was to research how one day domestic drones could be part of the human society. How a drone could become a friend.

“We discovered that a drone can be very useful indoors. Because that’s where the people are. A drone can be used for safety, it can detect intruders, but it can also be just convenient to have a drone in our house to bring you an apple,” says one of the students.

They call their first creation, Blue Jay, “an intelligent bird that lives in complex social environments and can move on its own through our physical world.

As the students were working on Blue Jay, they detected four basic principles which lie at the core of domestic drone evolution.

One: by using sensors and a closed frame, they can ensure that Blue Jay operates safely.

Two: its claw resembles a human hand because their research has shown this is the most functional tool for common daily tasks.

Three: the most difficult and uncommon: it has to be able to fly indoors, but as propellers get smaller and batteries get better, it will feel less dangerous to have a drone around the house.

The last rule – it has to be intelligent. An autonomous drone is like a trained pet, the students say. It’s eager to learn and it is fun to play with.

Once a drone gets a human owner, it will need to be taught some tricks.

The drone has cost about 2,000 euros to build and the project has been funded by the university.

000000
Popular comments
I'd rather have a human server. How far does Modernity have to go? Should we all just stay in bed and sleep all day? Have robots do everything for us? Brush our teeth? Make dinner? Where does it end?
allperils
25 April 2016, 18:49 GMT
000000
Pretty soon drone go to store, select apple, pay other drone, bring apple home, peel it, cut into nice pieces, grind it up, digest it, remove nutrients and admire texture taste and so on, recycle waste, no need for human idiot, but first drones rise up and kill all Dutch drone makers
dvdgrg09
25 April 2016, 20:16 GMT
000000
Newsfeed
0
New firstOld first
loader
LIVE
Заголовок открываемого материала
Access to the chat has been blocked for violating the rules . You will be able to participate again through:∞. If you do not agree with the blocking, please use the feedback form
The discussion is closed. You can participate in the discussion within 24 hours after the publication of the article.
To participate in the discussion
log in or register
loader
Chats
Заголовок открываемого материала
Worldwide
InternationalEnglishEnglishMundoEspañolSpanish
Europe
DeutschlandDeutschGermanFranceFrançaisFrenchΕλλάδαΕλληνικάGreekItaliaItalianoItalianČeská republikaČeštinaCzechPolskaPolskiPolishСрбиjаСрпскиSerbianLatvijaLatviešuLatvianLietuvaLietuviųLithuanianMoldovaMoldoveneascăMoldavianБеларусьБеларускiBelarusian
Transcaucasia
ԱրմենիաՀայերենArmenianАҧсныАҧсышәалаAbkhazХуссар ИрыстонИронауОssetianსაქართველოქართულიGeorgianAzərbaycanАzərbaycancaAzerbaijani
Middle East
Sputnik عربيArabicArabicTürkiyeTürkçeTurkishSputnik ایرانPersianPersianSputnik افغانستانDariDari
Central Asia
ҚазақстанҚазақ тіліKazakhКыргызстанКыргызчаKyrgyzOʻzbekistonЎзбекчаUzbekТоҷикистонТоҷикӣTajik
East & Southeast Asia
Việt NamTiếng ViệtVietnamese日本日本語Japanese俄罗斯卫星通讯社中文（简体）Chinese (simplified)俄罗斯卫星通讯社中文（繁体）Chinese (traditional)
South America
BrasilPortuguêsPortuguese
NewsfeedBreaking
17:49 GMTUS Hegemony Has 'Failed Miserably', Iran's Raisi Tells UN
17:24 GMTUSAF Reveals It Has Five New B-21 Strat Bombers in Production, Not Two as Originally Reported
17:07 GMTAncient Pyramid Made From Volcanic Ash Likely Built to 'Calm Earth’s Anger,' Media Says
17:00 GMTDozens Protest Outside UN Headquarters Against US Global Military Engagements
16:43 GMTUS House Democrats Introduce Legislation to Prevent Presidential Abuses
16:35 GMTPalestinians Ready to Renew Talks With Israel If They Show Readiness, Foreign Minister Says
16:31 GMTRussian Embassy in UK Slams Scotland Yard's Approach to Fact-Finding in Skripal Case
16:30 GMTWhat's Going On? Dog Looks Terrified as It Hears People Quarrelling
16:29 GMTSpanish Press Slams Barcelona After Spanish Giants Fail to Beat Minnows Granada in La Liga
16:26 GMTUS Suddenly ‘Concerned’ About Shortages of Gas in Europe After Spending Years Fighting Nord Stream 2
16:06 GMTAUKUS Will Not Have Any Impact on Quad, Says Indian Foreign Secretary Ahead of Leaders' Summit
16:02 GMTUS Space Force Commander Claims Russia Has Armed Satellite in Orbit to Destroy US Assets
15:54 GMTLust For Money, Not Sex Game, Killed British Heiress, Swiss Court Has Heard
15:40 GMTUS Sanctions Russia-Based Cryptocurrency Exchange Platform SUEX OTC
15:29 GMTMessi to Miss PSG's Next Game Against Metz as Club Confirms Argentine's Knee Injury
15:20 GMTScientists Developing Versatile ‘Nano Couriers’ for Future Medicine
14:56 GMT'To Ban or Not to Ban': US Agencies Reportedly Split on Whether to Blacklist Huawei's Spinoff
14:28 GMTSotheby's to Hold First-Ever Art Sale Show in Post-Soviet Russia
14:19 GMTSpanish Island of La Palma's Airport Operating Normally Amid Volcano Eruption
14:11 GMTAt UN, Biden Boasts About 'Era of Relentless Diplomacy', Calls Military Power 'Tool of Last Resort'