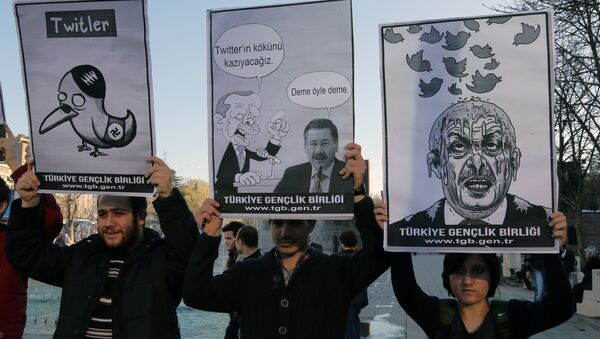 Ankara Asks Turkish Firms in Netherlands to Report Those Mocking Erdogan
Last week, Dutch media reported that the Turkish consulate in Rotterdam had emailed Turkish organizations operating in the Netherlands, asking them to report cases of insults being made against the Turkish leader. The request came a day after Dutch authorities said that they intended to abolish a law which made insults against a friendly state's leaders a criminal offense.

Dutch officials have called the Turkish initiative a disturbing case of Turkish overreach into Dutch affairs.

Speaking to Sputnik Turkey, Orhan Selim Bayraktar, the head of the Netherlands branch of the Republican People's Party, Turkey's main opposition party, said that the scandal has been a humiliating experience for the country's estimated 400,000 ethnic Turks.

"For starters, requests like this by the Turkish consulate go far beyond their functions. Secondly, this is something for lawyers and prosecutors, not the staff of the diplomatic mission, to be engaged in. Thirdly, the behavior of the Turkish Consulate has caused a wave of reaction from Dutch society, as a result of which Turkey has found itself on the agenda in a very humiliating way."

"For me, as a Turk, this is something very unpleasant and painful to observe. We do not deserve such treatment. Neither the president nor the Turkish diplomatic mission has the right to take actions which decrease our country's prestige in this way."

Turkey in Further Media Crackdown as EU Courts Ankara Over Migrants
Another unfortunate consequence of the initiative, Bayraktar said, is that "all Turks living abroad now show apprehension. What if, somewhere, someone says something objectionable to the country's authorities? Will this be cause to institute legal proceedings? After this scandal, the agenda of Turks living in the Netherlands has changed."

"Before, we discussed Dutch issues, or issues in the areas where we live. Now we have to deal with this problem,which has risen suddenly and out of nowhere. We have to think about the classification of insults against the Turkish president, and it shouldn't be this way."

"I don't think that any Turk living abroad wants to insult their own president. But the authorities in Turkey do not understand this, and are trying to establish universal control, which spoils our lives and puts us in a very difficult position."

Ultimately, Bayraktar said, if Mr. Erdogan does not want to face public criticism, he shouldn't be involved in politics.

"If the president does not want to be criticized and insulted, he should leave the political arena. Because for me, as a politician, it's obvious that if you choose to enter politics, you will have enemies who will insult you, and friends who praise you. If you cannot get used to this, you have no business being in politics. The Turkish president should abandon the persecution of his own citizens. He must serve as the guarantor of our freedoms, instead of assisting in their limitation."