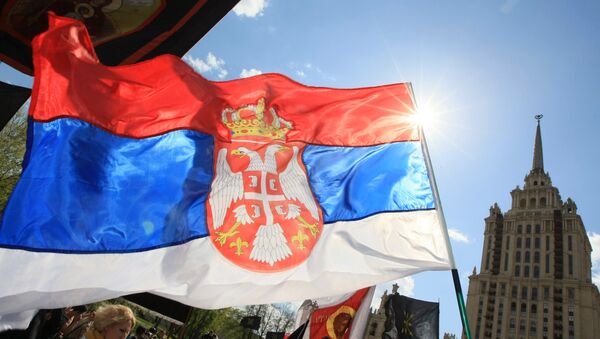 © Sputnik / Ruslan Krivobok
/
Go to the photo bank
Subscribe
Sooner or later, Serbia will become the center of a geostrategic fault line between NATO and Russia, writes Expert Magazine contributor Sergei Belous. There will come a point, the journalist says, when Serbian leaders' game of 'geopolitical splits' becomes impossible to maintain, and they will have to make a choice between NATO and Russia.

Russia’s Election Commission Registers No Fraud During Serbian Elections
Serbia is holding snap parliamentary elections on Sunday, with pundits describing the poll as a litmus test of Prime Minister Aleksander Vucic's pro-Brussels course. Russian analysts joined their foreign colleagues in predicting a victory for the incumbent from the Serbian Progressive Party, who assumed office last April, and initiated the elections two years ahead of schedule.

Vucic's campaign has stressed that membership in the European Union is his party's key goal, but has also said that it wants to preserve good relations with Russia.

In his in-depth analysis for the Russian business magazine Expert, translated and adapted by Oriental Review, Belgrade-based contributor Sergei Belous argues that as the North Atlantic Alliance continues its expansion, while relations between Moscow and the military bloc deteriorate, Serbia will have to make a choice: to ally with NATO, which bombed the country less than two decades ago, or to return to its historical alliance with Russia.

"We intentionally set the bar too high for the Serbs to comply. They need some bombing and that's what they are going to get."

"This," the journalist writes, "was how then-US Secretary of State Madeleine Albright described the draft peace agreement devoted to the resolution of the Kosovo crisis in Rambouillet in February 1999, speaking to journalists on the sidelines (off the record, of course)."

The Grim Anniversary of NATO's Bombing of Yugoslavia
"At the time, the Yugoslav delegation stated its willingness to concede many points, with the exception of independence for Kosovo (which was nonnegotiable for the Albanians). But the Yugoslavs did not see the final draft of the accord until the last day of the talks, and as it turned out, two-thirds of that document was entirely new to them (and they were presented with it literally only a few hours before the signing deadline)."

The new draft, Belous recalled, included provisions to see the deployment of NATO troops not only in Kosovo, but throughout the Federal Republic of Yugoslavia. According to the agreement, the troops were to be given unrestricted passage and unimpeded access throughout the country, and, moreover, would "be immune from the Parties' jurisdiction in respect of any civil, administrative, criminal or disciplinary offenses."

"Belgrade, feeling like they were being asked to accept terms of occupation and surrender, refused to sign the agreement…NATO then treated this rebuff as a casus belli: after the Serbian government definitively rejected the ultimatum thrust before them in the document, the alliance began missile and bomb strikes in Yugoslavia on March 24, 1999."

"On February 12, 2016, the Serbian parliament ratified a new agreement with NATO that included terms very similar to those demanded in Rambouillet 17 years ago. In other words, the bar that Belgrade considered to be 'set to high' at the end of the 20th century, and which they could not accept even at the cost of war, has now been accepted –little by little, unobtrusively, and without complaint – over the past decade by Serbia's new leaders."

Over 10,000 Participate in Anti-NATO Rally in Serbia - Organizer (VIDEO)
This agreement, Belous writes, was signed in September 2015, and granted NATO logistical support staff the right to freely throughout Serbia, and to access public and private facilities. It also allowed for cargoes to be exempted from customs duties and taxes, and for personnel to be granted diplomatic immunity. Receiving almost no media coverage when it was signed, "alarm bells only went off for the public after it was ratified in February 2016."

"Responding to popular discontent and criticism from his opponents, Prime Minister Aleksander Vucic asked, 'if we're going to demand that NATO protect Serbs in northern Kosovo, how can we at the same time not allow it to enter northern Kosovo?' But in fact, this rhetorical question is nonsensical (and not just because NATO has its own airfields in Kosovo as well as Camp Bondsteel, the second-largest American base in Europe)."

NATO, Belous noted, has never played any role in protecting Serbian interests in Kosovo. In fact, he writes, "after NATO troops entered Kosovo, approximately 210,000 people were forced to leave (according to the Office of the UN High Commissioner for Refugees), and over 300 Serbs were killed and 455 went missing just during the five-month stay of the international peacekeeping force. Furthermore, during the infamous pogrom that took place March 17-19, 2004, NATO representatives passively allowed Albanian extremists to burn over 900 Serb homes and set fire to, severely damage and desecrate 35 Orthodox monasteries (many of which date back to the 14th, 15th, and 16th centuries and some even under the protection of UNESCO), and to expel over 4,000 Serbs from the area."

Alleged Ex-Bandit Thaci Inaugurated as New President of Kosovo
The journalist suggests that an air of despair has beset the country's leadership, with officials fearing that 'disobedience' to their Western partners could result in the repeat of such tragedies. "I have repeatedly heard from Serbian colleagues comments filled with hopelessness, with people asking 'what choice does Serbia have, when NATO troops have entered our house, and we are surrounded by the alliance?'"

"Serbian leaders never tire of assuring their citizens that they have no aspirations to join the NATO Alliance. 'Serbia has no plans to enter NATO, it wants to be militarily neutral', Prime Minister Vucic said March 2, 2016, commenting on opposition parties' demands that a referendum be held on the issue."

"The head of the government does not think there is any need for the public to vote on the matter. And it's true that the people's will would be easy to predict, because according to the latest public surveys, conducted in January and February, only 10.5% of Serbians support the idea of NATO membership, while 79.1% are opposed (10.4% declined to answer). A recent study by IPSOS revealed a similar pattern: only 7% hold a positive opinion of the alliance."

This, the journalist explains, is why President Tomislav Nikolic rushed to sign the NATO logistics agreement on February 19, "a day before a scheduled protest to demand its veto. After thousands of prosecutors flocked to an anti-NATO rally in Belgrade on February 20, President Nikolic published an article titled 'Why I Signed the NATO Law'…Overall the article resembles an attempt to shift the bulk of the responsibility for the rapprochement with the alliance onto the shoulders of previous administrations," including a discussion on the agreement to join the NATO Partnership for Peace program.

The roots of Serbia's pro-Western shift, Belous recalls, go back to the 'Bulldozer Revolution' of October 2000, when President Slobodan Milosevic, with Washington's support, was deposed. "The new government quickly redirected the country's foreign policy toward the ideal of European integration – which meant that Serbia was then predestined for assimilation into Europe's security architecture, which is tightly bound to NATO."

Serbia EU Entry Hinges on Compliance With Political Criteria
A string of defense-related agreements were signed, the first in July 2005, allowing NATO forces transit for its peacekeeping operations. In 2014, Serbia and NATO signed a Status of Forces Agreement, allowing NATO to use Serbian military infrastructure, "to bring the legal framework regulating defense into line with EU rules, and to introduce the standards of NATO and the Bologna Process into the military education system for Serbian officers."

"The next step was the operational document known as the Individual Partnership Action Plan, which lays out a broad spectrum of cooperation between Serbia and the NATO alliance – not only in regard to security and defense, but also pertaining to issues of human rights, and economic, domestic and foreign policy, including the prospect of European integration. Paradoxically, Serbia has even pledged to 'introduce a public information strategy on cooperation with Euro-Atlantic structures through the PfP with the aim of gaining public support', which means that Serbian taxpayers must shell out from their own pockets to pay for propaganda directed against them."

Ultimately, Belous notes, "the above documents, in addition to the recent Logistical Support Agreement, so firmly tie Belgrade to the alliance that no particular purpose would be served by officially joining it… As Dorde Vukadinovic, editor in chief of the magazine New Serbian Political Thought, aptly put it, 'although Serbia has not officially entered NATO, NATO has effectively entered Serbia.'"

Meanwhile, the journalist suggests, leaders' continued public opposition to the alliance has actually served to "lull Moscow's vigilance," and "allowed [them] to preserve their reputation and maintain the image of being 'Russophiles' in the eyes of voters."

"Yet at the same time, and despite the escalating Euro-Atlantic propaganda, Russia's popularity in Serbia is growing, and the idea of the 'European choice' is gradually losing its devotees. This was backed up by recent polling by IPSOS: in 2014, 54% of Serbs would have voted in favor of EU membership, but by early 2016, that number had dropped to 48%; and while 46% of respondents expressed a positive opinion of Russia in 2014, this year that number has risen to 72%."

Camp Bondsteel: Inside Look at US Military Enclave in Balkans (PHOTOS)
A survey conducted by the Vreme weekly news magazine showed similar results, with 50.9% in favor of European integration, and 67.2% in favor of 'an alliance with Russia'.

"Finally, according to the most recent study conducted by the Serbian Center for Free Elections and Democracy, an NGO funded by Western foundations and states, on the eve of [Sunday's] snap parliamentary elections, 71.6% of Serbs were against the idea of 'Serbian membership in the EU and NATO' (with 11.2% 'in favor' and 14% 'undecided'), and 55.2% indicating their preference for 'the traditional affiliation with Russia' (with 19.2% 'against' and 21.5% 'undecided')."

This trend, Belous suggests, "has caused panic in the ranks of Serbia's Euroatlanticists," who blame Russia for attempting to "stop Serbia in its process of democratization, stabilization, and move toward European integration." In fact, European countries, and particularly Germany, have done their best to keep out any form of Russian influence, including continued delays in granting the Russian-Serbian Humanitarian Center in Nis diplomatic status.

In the final analysis, the journalist notes, Serbian officials "continuing to chant the phrase 'military neutrality' at every opportunity, like a mantra," doesn't make this the reality that the country faces. Not only does the NATO Logistical Support Agreement stand to invalidate Serbia's neutral status in the event of war, but "the very idea of EU integration presumes a 'common policy toward security and defense' – which is somewhat inconsistent with euphemisms such as 'military neutrality'."

"The new government that will be formed after the April 24 elections won't have it easy: the rapidly growing estrangement between the Euro-Atlantic community and Russia means that Belgrade will eventually emerge as a geostrategic fault line. When, figuratively speaking, the earth begins to shift under the feet of the Serbian elite, no virtuoso 'geopolitical splits' will allow them to avoid answering the question – whose side are they on?", Belous concludes.