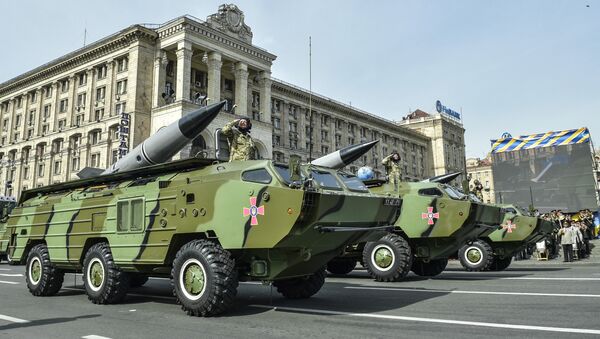 © Sputnik / Nikolay Lazarenko
/
Go to the photo bank
Subscribe
Ukrainian armed forces reportedly tested a new tactical ballistic missile. Weapons of this class are capable of delivering various types of warheads, including nuclear, up to 300 kilometers in distance.

Ukraine Intention to Join NATO Black Sea Flotilla Obviously Premature
The tests were supervised by the First Deputy Secretary of Ukraine’s Security and Defense Council Oleg Gladkovsky, according to a press release issued by the agency on April 22.

"The Ukrainian defense ministry continues to work on creating a tactical missile commissioned by the Defense Ministry. The current goal is to improve the weapon’s technical parameters, as well as to establish its closed production cycle in Ukraine," Gladkovsky said.

Tactical ballistic missiles are designed for battlefield use, with a range of under 300 kilometers. Such missiles are capable of carrying various types of warheads, including conventional, nuclear, biological and chemical payloads.