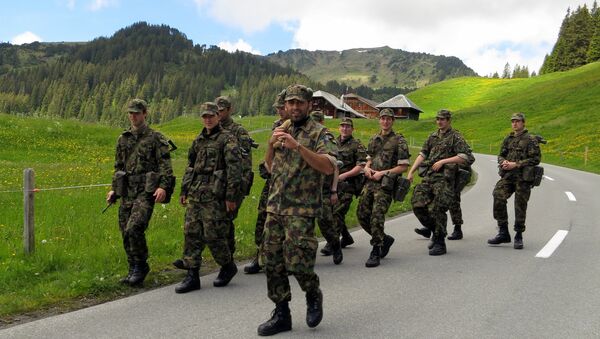 According to Swiss federal authorities, up to 2,000 soldiers are ready for mobilization to the country’s mountainous borders if the migrant flow exceeds the designated limit.

Merkel Agrees Germany Needs New Law to Tackle Mass Refugee Influx
According to Norman Gobbi, security director for the Swiss canton of Ticino, the Swiss government expects a dramatic increase in migrant flow this summer. "If Austria now closes off the Brenner Pass, Switzerland will become the only gateway to Northern Europe. Before that, we have to protect ourselves," he said. Austria has fallen under criticism from the EU earlier this month for constructing a 250-meter anti-refugee barrier on its border with Italy at Brenner Pass.

To increase security, the Swiss Army will deploy up to 2,000 soldiers to national border crossings for maximum period of three weeks. Should circumstances call for this period to be extended, a special decision by the Parliament will be required.

A scenario involving the mobilization of the army is considered to be worst-case. In this scenario, over 30,000 migrants would arrive in a span of few days. The lightest scenario projects no more than 10,000 migrants over 30 days.

This decision is based on the Kosovo crisis in 1999, when over 9,000 asylum seekers came to Switzerland in the span of one month. The Swiss migration office said it will increase its accommodation capacity from 4,600 to 9,000, in the event of the worst-case scenario, using municipal and military buildings.

Following the Brussels attacks, the Swiss government reformed its Army, reducing its size while raising its funding, to prepare a well-trained force for fast mobilization. However, since these reforms caused significant controversy in Swiss parliament, they will not come into effect until  2018.

The Greek military faced a shelter shortage at the end of March, after its temporary facilities were filled. Greece began returning refugees to Turkey on April 4. According to the president of the European Commission Jean-Claude Juncker, "[On 18 March] the Commission approved another €30 million of support for the Greek army as it helps the [total] 45,000 refugees in the country. This brings our support to Greece to a total of €180 million since last year."