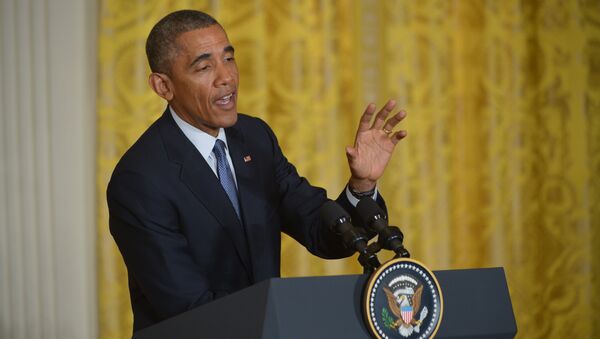 US President Barack Obama said that there was a significant reduction in violence in Syria for seven weeks.

Obama: Ceasefire in Syria ‘Very Fragile and May Be Breaking Down’
WASHINGTON (Sputnik) — The cessation of hostilities in Syria has resulted in a notable decline in violence since it was agreed to in February, US President Barack Obama said on Friday.

“The cessation of hostilities actually held longer than I expected, and for seven weeks we have seen a significant reduction in violence inside that country,” Obama said in a press conference in London.

Obama stated that he and Russian President Vladimir Putin spoke on Monday to reinforce “the importance of us trying to maintain the cessation of hostilities.”

US Has No Plans for Active Military Cooperation With Russia in Syria
The United States and Russia partnered to oversee the ceasefire, which was intended to facilitate the ongoing political process in Syria and ensure humanitarian aid deliveries to besieged parts of the country.

Earlier in the week, President Obama described the ceasefire as fragile, warning that it “may be breaking down” after largely holding for over two months.

The Syrian ceasefire went into effect on February 27 among all sides in the civil war, which has been ongoing since 2011.