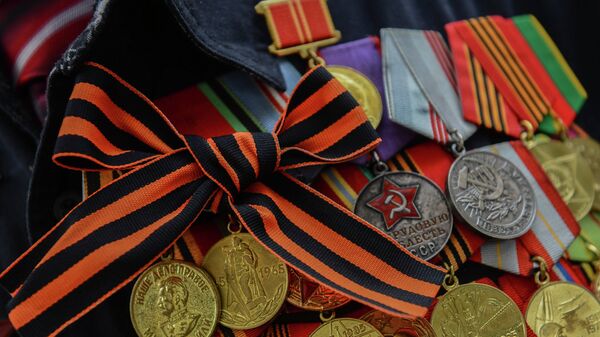 Black-and-orange St. George ribbons distribution campaign kicked off in Russia on Friday, more than two weeks ahead of the Victory Day.

MOSCOW (Sputnik) — The St. George Ribbon campaign to distribute black-and-orange ribbons – a symbol of the Soviet victory in World War II – started in Russia on Friday, ahead of the Victory in Europe Day.

Rossiya Segodnya International News Agency Director General Dmitry Kiselev presented this year's first ribbons to representatives of the Immortal Regiment patriotic initiative during a press conference at the agency's building, where the idea of the campaign was born 11 years ago.

"This campaign, which began as an idea in the walls of our news agency in 2005, has developed into a large-scale flashmob. This ribbon is a foothold of values for people, which is more relevant today than ever," Kiselev told the press conference launching this year's event.

Russian Activists Planting Flag at Latvian NATO Base Charged With Terrorism
Since the campaign was initiated, it has become a tradition for Russians to wear the ribbon of St. George ahead of the Victory Day, celebrated in the country on May 9.

Starting from 2009, St. George ribbons have been distributed not only in Russia but also in other countries, by Russia's Federal Agency for the Commonwealth of Independent States, Compatriots Living Abroad and International Humanitarian Cooperation (Rossotrudnichestvo). This year, the organizers of the event will distribute the ribbons in over 70 countries.

Forward, March! Russian Military Preparing for Victory Day Parade
For millions of people in Russia and former Soviet countries, the St. George Ribbon is a manifestation of national memory, a bond between generations and a link to former military glory.