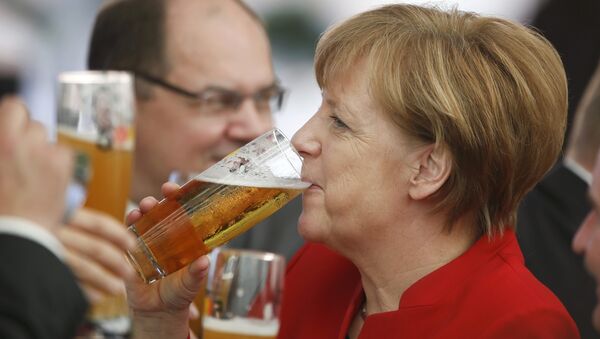 © REUTERS / Michaela Rehle
Subscribe
German Chancellor Angela Merkel's CDU/CSU Union Party has plummeted to 33 percent in the latest poll - its lowest rating since 2011, following months of controversy over the refugee policies which has threatened to split her own party.

According to the Deutschlandtrend survey for public broadcaster ARD, only 33 percent of Germans would vote for Merkel's CDU/CSU party if there were a general election this week, way down on the 41.5 percent the party achieved at the national elections in 2013.

The poll found that 21 percent of respondents would vote for the SPD, which is coalition with CDU/CSU, causing some supporters to say the party had been tarnished by the alliance. The right-wing populist AfD part polled 14 percent, the Greens twelve percent, the Left Party receives eight percent, the FDP seven percent, with other parties on five percent.

Merkel has come in for severe criticism at home over her open doors policy to refugees, which initially brought her plaudits. However, the sheer volume of migrants arriving in German has caused major strains in many German states, with asylum seekers creating a burden on local authorities. More than 1.1 million entered Germany in 2015 alone.

Merkel has refused to bend for call to cap the total number of refugees Germany will take this year, causing anger in Bavaria, where CSU Party leader and minister President Horst Seehofer has had to deal with the flood of migrants coming over the border from Austria. Following the CDU/CSU Union's poor performance in this week's regional elections, Seehofer said:

"We should tell people that we get it and that we will draw the consequences from this election result."

Merkel's falling popularity has been accelerated by her isolating Germany within Europe. Her plans to relocate refugees across all 28 member states according to a mandatory quota system have met with huge opposition — particularly from Central European states.

Her calls for a pan-European response to the crisis — keeping open the border inside the Schengen zone — have been ignored as country after country closed their borders. Her deal with Turkish Prime Minister Ahmet Davutoğlu to stem the migrant flows in return for a one-for-one migrant swap and accelerated membership of the EU has been widely criticized.

In March, Merkel was dubbed "the pianist on board the Titanic" by senior lawmaker — and former minister — Peter Ramsauer, who says her handling of the refugee crisis has made her unelectable in the 2017 vote for Chancellor.