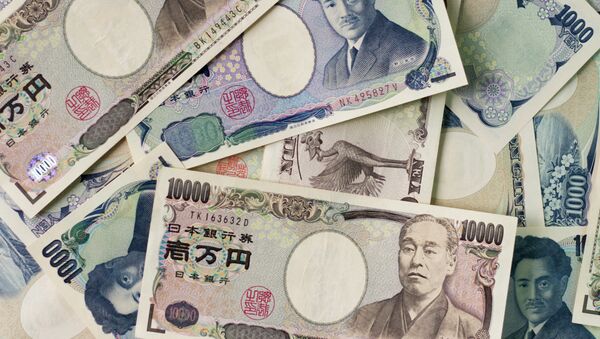 The Bank of Japan (BoJ) may deepen its monetary easing policies by paying commercial banks to borrow and then charging them for accumulating reserves; however, Japan’s significant exposure to international trade means monetary policies are not enough to overcome the sticky disinflationary stalemate.

Recharged: Abenomics Lift Japan Out of Recession in Q1
Kristian Rouz — Amidst a heated debate on the effects of negative interest rates upon the broader economy, the Bank of Japan (BoJ) is allegedly discussing a possible deepening of its ultra-accommodative rates policies. The regulator might implement a —0.1% rate on commercial banks' reserves, thus prompting them to boost their issuance of new loans, supporting the faltering economic expansion and overcoming persistent disinflationary risks.

The yen thus might weaken against the dollar, should the new measure be taken, improving the Japanese zaibatsus' performance in international trade. However, as the initial introduction of negative rates in January largely failed to provide a boost to the economy, any possible effects of the new round of easing is questionable, while the negative spillovers, such as greater market volatility, are almost certain.

The BoJ's Stimulating Bank Lending Facility is currently offering loans to commercial banks at a zero percent interest rate, which might be a platform for the new round of ultra-accommodative rates policies, charging banks 0.1% for keeping money liquidity in reserves, according to a Bloomberg report.

Another BoJ lending facility, providing zero-interest loans to enterprises involved in the hottest sectors of the economy like financial services might be another vehicle for the deeper monetary easing regime, Bloomberg's unidentified sources said.

On the other hand, the BoJ is intending to pay banks and select companies to borrow from the regulator, thus intending to undertake a two-pronged effort to pump more money into the real economy. Within the framework of the Stimulating Bank Lending Facility, the BoJ has thus far provided some 24.4 trln yen ($223 bln) worth of loans to commercial banks.

"The BOJ can say this will help the whole economy because the banking sector is one of the most vital channels for monetary policies," Takashi Shiono of the Tokyo branch of Credit Suisse said.

Burglar’s Dream: Japanese Stop Banking, Hoard Over $368 Billion at Home
However, the regulator is concerned the money will end up piled in foreign bank reserves as yen is one of the world's few reserve currencies, resulting in the yen appreciating against the dollar in the recent two-three months, fluctuating between 110-120 yen per dollar. The FX rate which the zaibatsu international trade positioning finds comfortable is 124 yen per dollar, meaning a stronger yen is a menace to Japan's exports and, consequently, broader economic growth.

The BoJ's current stimulus provides 80 trln yen to the economy per year in bond buyouts, and an additional 3.3 trln yen of exchange-traded funds (ETFs). However, Japan's inflation is still near-zero due to the low oil prices and cheap commodity imports, while the ongoing appreciation of the yen renders manufactured goods more expensive and therefore less competitive in the oversaturated international market.

"Such measures by the BoJ alone may not work effectively, unless it works together with the government," Daiju Aoki of UBS AG Group said. "A policy mix with fiscal spending or a growth strategy which spurs private demand is needed."

Meanwhile, the BoJ Governor Haruhiko Kuroda has repeatedly voiced concern over the appreciating yen, thus indirectly supporting allegations that the regulator might deepen its monetary stimulus soon. Japan's financial sector would welcome such a move, particularly after the first implementation of negative interest rates earlier this year failed to make up for January's capital carnage in the stock market. Japanese shares advance on Friday, welcoming the BoJ's easing sentiment. However, adding new albeit limited stimulus is very unlikely to provide a major push to the faltering economy at this point, with international headwinds dominating Japan's domestic situation due to its high level of exposure to global trade. The US-led Trans-Pacific Partnership (TPP) pact might, however, help resolve some of the most acute issues marring the performance of Japanese manufacturers — at the expense of US jobs.