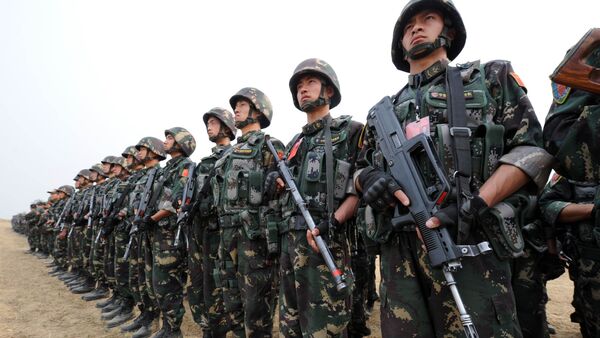 In response to reports that it has massed troops along the North Korean border, China maintains that all current deployments are at normal levels and that there has been no troop escalation along the peninsula.

On Wednesday, reports surfaced that Beijing was preparing for North Korea’s fifth nuclear test by deploying troops along its border with the country.

According to a statement from the Hong Kong-based Information Center for Human Rights and Democracy, 2,000 Chinese troops were tasked with measuring radioactive emissions along the border should Pyongyang follow through with its test.

If true, it is unclear how the move would affect relations between the longtime allies.

On Friday, however, Beijing denied the reports.

"The relevant report does not accord with the facts," the Chinese Defense Ministry said in a statement. "The Chinese military maintains normal combat readiness and training on the China-North Korea border."

China has been vocally critical of North Korea’s recent nuclear and ballistic missile tests. Earlier this month, the People’s Daily argued that Pyongyang’s actions threatened to destabilize the peninsula.

"Syria’s turmoil came about as the result of a population of only 20 million or so people. Just imagine what it would be like for the Korean peninsula with [roughly] 80 million?" the editorial read.

"With inadequate economic, military, technological and management capability, should there be any nuclear leaks, like those that occurred in Japan…what would happen to northeastern China’s security?"

The editorial was later removed.

Earlier on Friday, Beijing announced that it planned to meet with South Korean officials regarding security concerns.

"The Special Envoy of South Korea Kim Hong-kyun arrived in China to meet with the special representative of the Chinese government for Korean Peninsula Wu Dawei and to exchange opinions on the situation on the Korean Peninsula," said China’s Foreign Ministry spokeswoman Hua Chunying.

Experts expect Pyongyang to carry out its fifth nuclear test in early May. Earlier tests resulted in harsh new sanctions being implemented on North Korea by the United Nations.

"The situation on the Korean Peninsula calls for particular alarm. Pyongyang is ignoring the demands of the UN Security Council and is continuing to make threats with nuclear missile experiments," Russian Foreign Minister Sergei Lavrov said during a speech at the Mongolian Foreign Ministry earlier this month.

"We hope that the North Korean side will listen to the voice of reason, refrain from taking new irresponsible steps, and realize the elusiveness of hopes to reach recognitions by the global community of its nuclear status."

North Korea maintains that it needs nuclear weapons to defend itself, specifically citing recent joint military exercises held by the US and South Korea. Those drills carried out scenarios that explicitly rehearsed a “preemptive strike on North Korea,” according to Gregory Elich of the Korea Policy Institute.