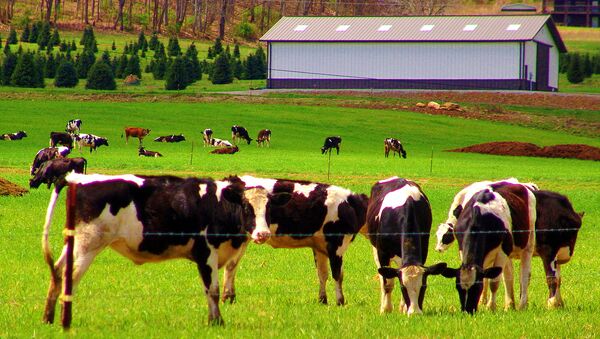 © Flickr / Susie Blackmon
Subscribe
A Chinese-led consortium has agreed to buy Australia’s most iconic cattle company S. Kidman and Co. worth $289 million and covering for one percent of Australia’s landmass, the Australian Broadcasting Corporation wrote citing a source in the company.

China Interested in Buying Shares in Russia's Rosneft Oil Giant
The consortium, made up of Dakang Australia, whose company is Hunan Dakang Pasture Farming, a private Chinese company with no government ownership, is set to snap up 80 percent of the land, with Australian Rural Capital (ARC) taking the remaining 20 percent.

In November, Australia's Foreign Investment Review Board blocked the sale of Kidman to an overseas buyer, saying the proximity of its Anna Creek station to a weapons testing range could compromise national security.

After the deal was rejected in November, a Kidman representative said the company had ensured all potential buyers had completed due diligence in an attempt to mitigate any issues surrounding national security.

Kidman was established in 1899 by Sidney Kidman who became known as Australia's "cattle king."

They raise about 185,000 cattle at stations spanning 101,000 square kilometers, or about 1.3 percent of Australia's total land area – bigger than Ireland.

Security concerns have often been brought up to block the sale of Australian assets  to Chinese-led consortiums, Chen Fengying, a leading economist at China’s Institute of Modern International Relations, said in an interview with Sputnik.

“The hurdles erected in the way of Chinese companies’ ongoing effort to explore foreign markets reflect deep-seated Western fears of the so-called 'Chinese threat.' They see Chinese businesses as a threat to their comfortable existence,” Chen Fengying said.

She added that each time the Chinese buy real estate abroad their local partners warn that this would drive prices up. When China wants to acquire any assets abroad its foreign partners insist that these assets cannot be sold to a foreign buyer.

“They also fear that China would snap up some of their commodities and trademarks. In a word, they view us as a threat, even though the global acquisition and takeover of enterprises is an inevitable element of the ongoing process of global economic restructuring,” she said.

The process of economic globalization will continue and European and American energy and oil companies are likewise engaged in this process which helps make them more competitive.

“Wary as some countries are of China’s participation in this process of mergers and takeovers, this is an objective economic development that simply can’t be turned back,” Dr. Chen said.

000000
Popular comments
western fears of chinese threat...? maybe china should just do what the english and european did to australia and north america; kill everyone in sight and claim it for yourself and let it be governed by a defacto puppet regime for decades if not centuries. coins.about.com/od/worldcoins/ig/World-Coins-Gallery-Index/Canadian-Money---Coins.--0Q.htm www.hdwallpapersnews.com/australian-flag-free-hd-wallpapers.html
mehrdadkovichni
21 April 2016, 18:16 GMT
000000
Dr. Chen might do well to study a little about Australian Culture. Our land is VERY important to us Dr. Chen. Especially the agricultural farming land. When we get rid of the leftist lunatic policies, we will lock down the land grants. We've already fought hard to ensure it's harder and we've made sure several buyers have already been cast off. As for getting their hands on our prized Kidman land. Guess again mate! As of tonight, we manage to get a stay on the sale, and hold you up AGAIN!! The government must now take another look at the sale before allowing it to be handed over. If you get Kidman in the end, you won't get much more. The way it works in Australia mate, is if you don't have the backing of the country people it won't matter what you own. They won't help you trade, work, buy things. You get blocked out. Outback Aussie's tell politicians to shove it. They are hardcore and don't back down. Keep your one world global order 'aquisitions' OFF our pride land!
Aussie Pride
21 April 2016, 18:25 GMT
000000
Newsfeed
0
New firstOld first
loader
LIVE
Заголовок открываемого материала
Access to the chat has been blocked for violating the rules . You will be able to participate again through:∞. If you do not agree with the blocking, please use the feedback form
The discussion is closed. You can participate in the discussion within 24 hours after the publication of the article.
To participate in the discussion
log in or register
loader
Chats
Заголовок открываемого материала
Worldwide
InternationalEnglishEnglishMundoEspañolSpanish
Europe
DeutschlandDeutschGermanFranceFrançaisFrenchΕλλάδαΕλληνικάGreekItaliaItalianoItalianČeská republikaČeštinaCzechPolskaPolskiPolishСрбиjаСрпскиSerbianLatvijaLatviešuLatvianLietuvaLietuviųLithuanianMoldovaMoldoveneascăMoldavianБеларусьБеларускiBelarusian
Transcaucasia
ԱրմենիաՀայերենArmenianАҧсныАҧсышәалаAbkhazХуссар ИрыстонИронауОssetianსაქართველოქართულიGeorgianAzərbaycanАzərbaycancaAzerbaijani
Middle East
Sputnik عربيArabicArabicTürkiyeTürkçeTurkishSputnik ایرانPersianPersianSputnik افغانستانDariDari
Central Asia
ҚазақстанҚазақ тіліKazakhКыргызстанКыргызчаKyrgyzOʻzbekistonЎзбекчаUzbekТоҷикистонТоҷикӣTajik
East & Southeast Asia
Việt NamTiếng ViệtVietnamese日本日本語Japanese俄罗斯卫星通讯社中文（简体）Chinese (simplified)俄罗斯卫星通讯社中文（繁体）Chinese (traditional)
South America
BrasilPortuguêsPortuguese
NewsfeedBreaking
19:20 GMTFlorida Governor Ron DeSantis Takes Aim at Biden Administration’s ‘Catch-and-Release' Policy
19:08 GMTElon Musk Ranked Number One as he Surpasses Jeff Bezos on Forbes’ Real Time Billionaires List
19:07 GMTUS Reportedly Didn’t Tell Afghan Army of Plans to Slink Out of Bagram Due to Fear of Taliban Attacks
18:56 GMTSeveral Fireballs Spotted in US Skies – Video
18:53 GMTFrance's Greens Pick EU Parliament Member Jadot as Presidential Candidate
18:51 GMTCould Report on 'CIA Plot' to Kill Assange Help WikiLeaks Founder Evade Extradition to US?
18:44 GMTYouTube Permanently Removes 2 German Accounts of Russia's RT
18:33 GMTNY Gov. Hochul Signs Executive Order to Alleviate Health Care Workforce
18:28 GMTBlah Blah Blah: Greta Thunberg Slams World Leaders at Youth Climate Summit
18:19 GMTAnnapolis Newspaper Shooter Ramos Sentenced to More Than 5 Life Sentences Without Parole
18:19 GMTPsaki: Generals' Advice to Keep 2,500 Troops in Afghanistan 'Not a Long-Standing Recommendation'
18:03 GMT'Not a Stable Man': Ousted Punjab State Chief Slams Congress Party Leader
17:58 GMTTaliban to Temporarily Adopt Constitution of Afghanistan’s Last Monarch
17:43 GMTOver 400,000 Americans Receive COVID-19 Booster Shot During Weekend
17:43 GMTWhat's Behind Erosion of Public Trust in Biden on COVID-19?
17:10 GMTBiden Administration Gives $1Bln Boost to 1,300 Health Clinics Across US
17:00 GMTThe Hague City Council Member Suspected of Plotting to Kill Acting Prime Minister, Report Says
16:53 GMTTrump Called Ex-Press Secretary Grisham to Insist His Penis Wasn't 'Toadstool-Shaped,' Book Claims
16:48 GMT'Sexualised Body': Woman's Statue in Italy Evokes Outrage Over 'Male Chauvinism'
16:28 GMTTaliban Warns of 'Consequences' if US Drones Continue to Violate Afghanistan's Airspace