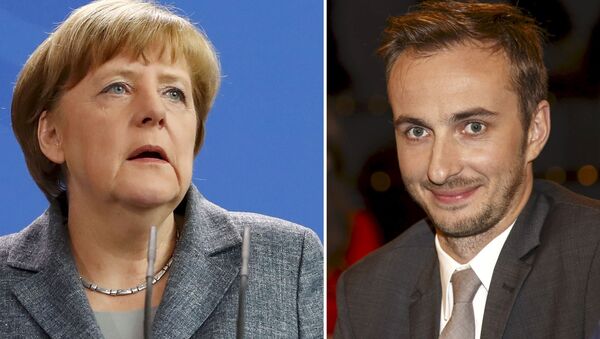 German authorities have given official permission to launch an investigation into the case of German journalist Jan Böhmermann, who performed an insulting satire poem criticizing Turkish President Erdogan and his policies.

Lost Political Weight? Merkel's Ratings Down 11% After Erdogan Satire Probe
The decision of the German government has, however, been criticized by many German residents who perceived it as a betrayal which undermines German values. Some of them consider the move of the German leader a gesture of submission and acquiescence to the Turkish president.

"We are now seeing the beginning of the end of Merkel's reign," Kalkofe said irritated. "I feel very sorry for this flabbiness," he added.

For instance, a satirist portrayed Merkel dancing in front of Erdogan and presenting him the journalist's head on a platter.

At the same time, Satirical magazine Der Postillon came up with the title "The conflict is settled. The government sends Böhmermann into the hands of the Turkish authorities."

Cartoonist Marian Kamensky depicted Merkel standing in front of the Turkish leader giving him a punching bag in the form of the disgraced satirist and boxing gloves.

Despite Merkel's statement that the investigation into Böhmermann's case should not be viewed as a pre-conviction, many perceived this move as a betrayal of German values and principles. German residents expressed their anger and frustration on social networks under the hashtag #NichtMeineKanzlerin (#NotMyChancellor).