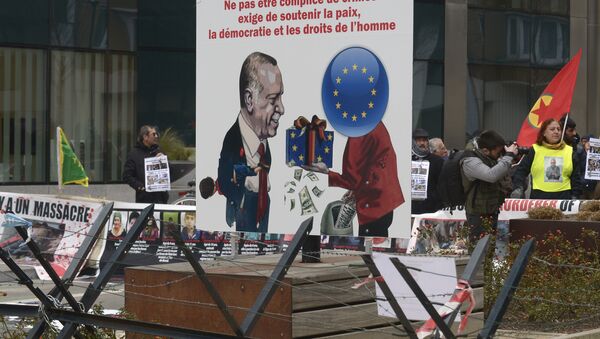 The Turkish list of "undesirable" journalists is getting too long, Italian journalist Giulietto Chiesa wrote for Sputnik Italy, referring to the case of Russian journalist Tural Kerimov, who was recently denied entry into Turkey.

This is Merkel's Chance to Show Germany's 'Red Line' to Erdogan
Kerimov's documents, including his Russian passport, press card and residence permit, were confiscated in the Ataturk International Airport by security officers.

According to Giulietto, in this way Turkish leader Recep Tayyip Erdogan is trying to demonstrate his strength and force Europeans into further submission.

"Erdogan wants not only billions euro promised by Angela Merkel, but something else: for example, the promise that he will enter Europe through the front door. This means that he wants to go to Europe with a position of strength and be accepted as he is. Thus, he is raising the stakes and forcing Germany to kneel down," the journalist wrote.

‘Erdogan Demands Submission': Why Turkey Is Difficult Partner for Germany
Kerimov's case can be viewed as another example of Turkish President Recep Tayyip Erdogan's crackdown on press freedoms in the country. But the list of his victims among journalists is constantly growing.

First, it was Ekrem Dumanli, arrested in 2014; then, Can Dundar, editor-in-chief of the Turkish newspaper Chumhuriet, detained in 2015, as well as many other Turkish journalists, who disappeared and died under mysterious circumstances.

However, Erdogan went further and even attacked German journalist Jan Böhmermann who criticized his policies and demanded his prosecution. Last week, Merkel decided to allow the investigation into Böhmermann's case, but has immediately drawn fierce criticism among German residents and human rights organizations.

"It is difficult to say whether he [Erdogan] will win this bet. In the near future, Angela Merkel may see her ratings drop, if she continues to let go this bulldog off the leash," Giulietto wrote.