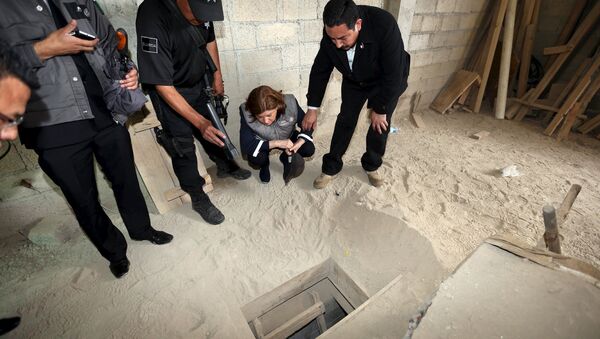 In the third case of its kind in a month, the US Border Patrol arrested members of a gang that had constructed a roughly half-mile-long subterranean passageway between Mexico and the US equipped for drug trafficking.

Arizona Border Sees Influx of Drones Smuggling Drugs to US From Mexico
The lengthy tunnel connected a private house in Tijuana, Mexico, and a fenced site in an industrial zone in San Diego, California. According to the US attorney's office, 500 yards of the route fell on the American side, and another 300 were on the Mexican side.

The San Diego tunnel entrance was a three-foot-wide hole hidden under a trash bin. Behind it was a spacious hallway that had lighting, ventilation, a large elevator and a rail system.

In the tunnel, authorities discovered an immense consignment of drugs, including a ton of cocaine and seven tons of marijuana.

Six people suspected of participating in the construction of the tunnel have been arrested, officials unveiled.

Rumors concerning the existence of a long tunnel between San Diego’s Otay Mesa neighborhood and Tijuana first came to light about six months ago. While trying to detect the passageway, Mexican federal law enforcement raided houses in several Tijuana neighborhoods, according to local residents. The eventual discovery though came from Americans, who made the announcement on Tuesday.

At about 800 yards, the tunnel is the longest drug route between California and Mexico discovered recently.

Hundreds to Smoke Pot in Front of the White House to Protest Weed Laws
Over a dozen tunnels along the border Mexico and California have been discovered since 2006. Some 75 drug corridors between the two countries have been identified in last five years, many of which were incomplete.

The San Diego-Tijuana corridor is popular with drug smugglers as it has very dry clay-like soil that is easy to dig. There are also warehouses on both sides of the border, making it easy to hide the heavy equipment required for tunnel construction.