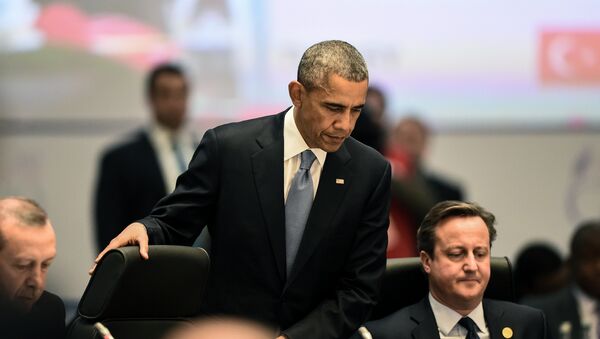 UK Prime Minister David Cameron has come under fire for using diplomatic strings to bring heavyweights from the US and other countries and major institutions to gain backing for Britain remaining in the European Union as part of 'Project Fear'.

Anti-EU campaigners say Downing Street must have had a hand in the decision by eight former US Treasury secretaries to pen an open letter in the London Times newspaper, saying Britain will be poorer and London's role as a global financial center could be undermined if it votes to leave the EU in a June 23 referendum.

"Brexit could call into question London's role as a global financial center. For many financial institutions, London has served as the financial springboard into Europe. A UK turned inward and less engaged in Europe is less able to lead on the critical challenges Europe faces," the former treasury secretaries said.

"The uncertainty surrounding Brexit already appears to be acting as a drag on investment and market sentiment, and a vote to leave could introduce an extended period of uncertainty that could hinder growth even further. A vote to leave Europe represents a risky bet on the country's economic future.

"The better alternative seems to us to work for progress within the confines of EU membership, without incurring the significant economic risk of Brexit: a smaller, slower-growing British economy for years to come."

Brexit folk call it Project Fear. But none of them — none — have explained how UK would quit EU while maintaining single market. Its fantasy

Their letter comes a week ahead of a visit by US President Barack Obama to London, where he is expected to give backing to Cameron's campaign to keep Britain in Europe. Ahead of the visit, Ben Rhodes, the White House deputy national security adviser, told reporters:

"He will make very clear that this is a matter the British people should decide when they head to the polls in June. We believe that all of us benefit when the EU can speak with a strong and a single voice and can work with us to advance our shared interests whether on security or prosperity. We believe that the UK has benefited from the single market that is good for the British economy and that, in turn, is good for the United States economy."

Anti-EU UK Independence Party (UKIP) leader Nigel Farage said: "Mercifully, this American president, who is the most anti-British American president there has ever been, won't be in office for much longer, and I hope will be replaced by somebody rather more sensible when it comes to trading relationships with this country."

The high-level interventions are deemed by many to be a breach of international diplomatic protocol, which dictates that nations will not interfere with the internal politics of other states. Cameron has already drawn criticism for organizing 'Project Fear' because most of his arguments are based on suggesting Armageddon if Britain left the EU.

Downing Street denied orchestrating the Times letter written by the former US treasury secretaries, saying they had initiated it themselves. But Cameron was quick to tweet:

Important letter from eight former US Treasury Secretaries: the UK economy and UK influence is stronger in Europe https://t.co/hc0jNmu93c