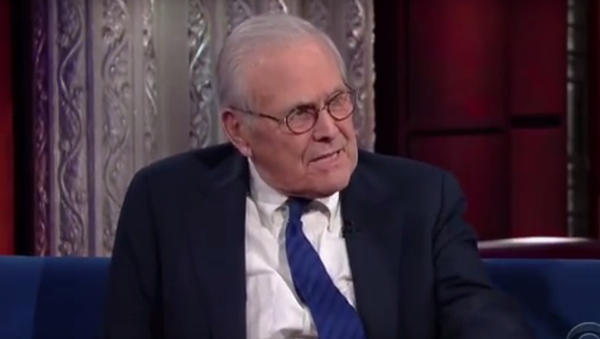 © YouTube/The Late Show
Subscribe
It’s tough out there for a war criminal. Donald Rumsfeld learned it the hard way after being decimated on Twitter on Tax Day, after the war apologist sent out several whining tweets about taxes.

The 83-year-old former US Secretary of Defense tweeted three times, complaining that he will likely not live to see the implementation of a flat tax in the country.

Unlike many others who took to social media to complain about their tax situation on Monday, Rumsfeld wasn’t met with camaraderie. Instead, the notorious snark of the twitterverse came out in full force, reminding him that there is always the possibility that there will be a flat tax, just for him, in hell.

Many jumped at the chance to blast Rumsfeld for his boosterism in the lead-up to the Iraq War, others expressed sadness that they may not live to see him prosecuted for his war crimes.

Rumsfeld, as a leading architect of the Iraq War, has famously claimed that the unnecessary decimation of an entire country had, “nothing to do with oil, literally nothing to do with oil.” He was also involved in decision making, allowing the extrajudicial execution of several people — a war crime and in breach of the Geneva Conventions.

Additionally, he is complicit in the use of torture in facilities including Guantanamo Bay and Abu Ghraib, practices which occurred while he was the Secretary of Defense.

Even the 41st US President, George H.W. Bush criticized Rumsfeld, calling him “arrogant,” in his recent biography.

“I think he served the president badly. I’ve never been that close to him anyway. […] There’s a lack of humility, a lack of seeing what the other guy thinks. He’s more kick ass and take names, take numbers. I think he paid a price for that,” Bush senior wrote.