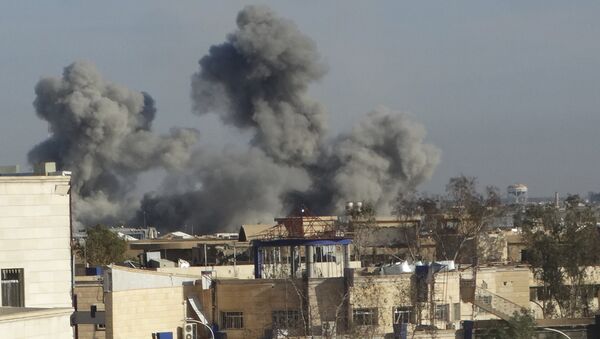 Throughout its air campaign in Syria, the US has shown a consistent disregard for civilian casualties. Thanks to new rules recently approved by the Pentagon, the death toll looks to climb even higher.

Unwilling to commit ground forces, the US has relied on airstrikes in its war against Daesh, also known as IS/Islamic State, in Syria and Iraq. This strategy has, inevitably, led to many civilian deaths.

While Washington could be working to decrease the number of innocent deaths, Defense Department officials have told USA Today that the Pentagon streamlined the process for approving targets last fall, a move that is expected to dramatically increase collateral damage.

The new rules allow Army Lt. Gen. Sean MacFarland to approve targets, even if there is a known risk of civilian deaths. Previously, such decisions had to be made after careful consideration by US Central Command, with some even requiring authorization from the White House.

In an effort to increase warfare efficiency, MacFarland can now give the go-ahead in a variety of scenarios, as long as collateral deaths are justified by the high value of the target.

US Lacks Figures on Civilians Killed During Daesh Occupation of Ramadi

“The gradualistic, painfully slow, incremental efforts of the current administration undercut the principals of modern warfare, and harken back to the approach followed by the Johnson administration,” David Deptula, head of the Mitchell Institute for Aerospace Studies, told USA Today.

Officials claim that the United States takes measures to decrease unintended casualties. Laser-guided bombs are accurate, and when attacking Daesh-operated oil wells, where civilians may be present, the Pentagon drops flyers warning of the impending attack.

In performing over 3,000 airstrikes each month, accidents happen. Since the bombing began in August 2014, over 40,000 US bombs have been dropped in the region.

The Pentagon claims 26 civilians have been killed since the beginning of the bombing, but officials, speaking on condition of anonymity, believe that number to be impossibly low.

It also fails to take into account US drone strikes in Syria, Iraq, and a number of other countries. According to a report released by human rights group Reprieve last October, unintended drone deaths could easily be in the thousands.

Reprieve found that in 2014 alone, 1,147 innocent people were killed in drone strikes meant to target 41 people.

The Pentagon came under fire last October after an AC-130 gunship attacked a Doctors Without Borders hospital in Kunduz, Afghanistan. Washington has shown an unsurprising lack of transparency about that incident, in which over 40 staff and patients, including children, were killed.

If those strikes are representative of the old rules of engagement, the future will likely remain violent.