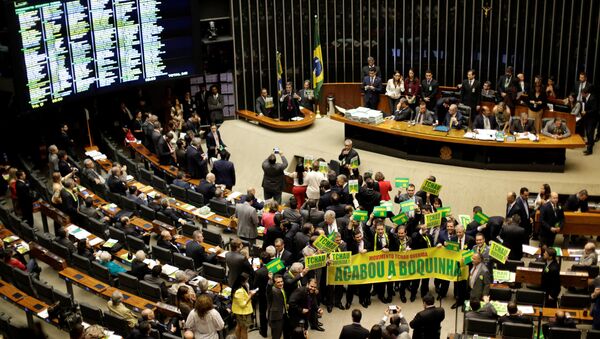 The campaign to impeach Brazilian President Dilma Rousseff is being actively supported by the political forces seeking an undemocratic coup in the country, the general secretary of the Socialist Party of Uruguay, Monica Xavier, told Sputnik on Monday.

"Not everyone, but without doubt there are many people in this movement who are not in favor of democracy, but want to see Brazil having authoritarian regime," Xavier said.

According to Xavier, there is a "component of aggression" coming from the lawmakers trying to topple the president who was supported by 54 million of Brazilians in the 2014 election while some of them are being investigated for corruption.

"That's what highlights the putschist intention of many of those standing for this decision [to impeach the Brazilian president]," she pointed out.

The Brazilian president has been facing a wave of public discontent for over a year amid the country’s struggling economy and a major corruption scandal in the state-owned Petrobras petroleum company. Rousseff lost several allies with the Progressive Party and the Social Democratic Party having left her coalition last week. The Brazilian Democratic Movement Party left the governing coalition in late March.