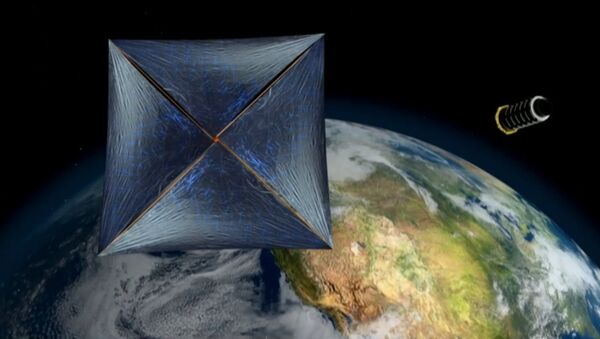 The ambitious Starshot project aims to send a nanocraft to search for extraterrestrial life in another solar system, powered by a 100 gigawatt laser from Earth.

The project aims to demonstrate the possibility of space exploration using light-propelled nano spacecraft. The scientists plan to launch a small spacecraft into space and propel it to our nearest star system, Alpha Centauri, in just one human generation.

The Alpha Centauri star system is 25 trillion kilometers (4.37 light years) away from Earth, and today's fastest spacecraft would take 30,000 years to get there. 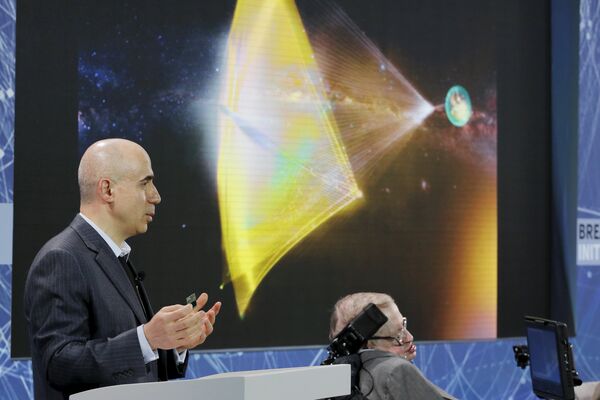 Investor Yuri Milner holds a small chip during an announcement of the Breakthrough Starshot initiative with physicist Stephen Hawking in New York April 12, 2016
© AP Photo / Lucas Jackson
The tiny probe will be transported to Alpha Centauri at a speed of 20 percent the speed of light, using a lightsail no more than a few hundred atoms thick, powered by a 100 gigawatt array of lasers on Earth.

The movement of the spacecraft relies on a concept known as photonic propulsion, which NASA scientist Philip Lubin, who is also working on the Starshot project, suggested last year.

When the powerful laser array shines on the reflective surface of the Starshot probe's lightsail, the momentum carried by energized photons within the laser beam is supposed to propel the spacecraft forward.

Astrophysicist Jonathan McDowell from the Harvard-Smithsonian Center for Astrophysics said that Starshot is humanity's best chance of reaching the stars, but has several hurdles to surmount.

"The trick is accelerating with the pressure of light to accelerate a big, thin film of plastic that's shiny and catches the laser light so it goes faster," he said.

"That's been demonstrated by the Japanese in interplanetary space a couple of years ago, but no one's got it really fast and we’re talking about putting something a thousand times faster than any human artifact has ever done."

McDowell said that it could take a decade to get a spacecraft to accelerate with a light sail, and longer to adapt the technology for the Starshot nanocraft.

"I think 10 years to get to demonstrating something accelerated with a laser light sail, but a generation to be able to do it for real to Alpha Centauri."

Harvard physics professor Abraham Loeb said that the Starshot project is made possible by recent advances in the miniaturization of electronics, particularly in the mobile phone industry. 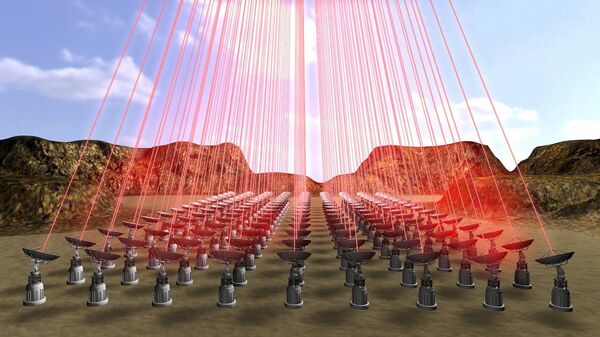 A still image taken from a video rendering shows phased arrays of lasers which could be used on Breakthrough Starshot, a $100 million research and engineering program aiming to demonstrate proof of concept for light-propelled spacecrafts
© REUTERS / Breakthrough Initiatives
"This method we’re talking about was conceived as soon as the laser was invented … The problem back then was that people thought that they needed to take humans along," he explained.

"The big technological advance over the past decades has been the miniaturization of electronics, smart electronics. It was all driven by the cellphone industry. If you look at an iPhone and strip it from the case and the human interface, you’re left with smart electronics that weigh roughly a gram, much lighter than anything else to use."

Astronomers Unearth 100-Year-Old Evidence of First Exoplanet Ever Recorded
Loeb said that after a successful launch, Starshot will be able to rapidly explore the Solar System.

"Just to give you an example, to get to Pluto it would take three days instead of the 9½ years it took New Horizons to get there. If we launch at a fifth of the speed of light, it'll get there the same week," he said.