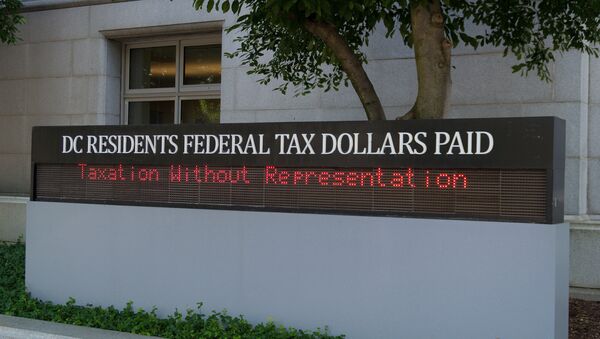 © Flickr / mrgarethm
Subscribe
The residents of America’s capital pay taxes like everyone else but have no congressional representation and their tax dollars are often vacuumed up by politicians they did not elect.

On July 16, 1790, the United States Congress designated a small patch of swampland as the nation’s capital, a high honor for what has become arguably the most powerful city in the world, but one that came with an economic consequence. Washington, DC is not a state, but rather a district.

The District, home to some 672,000 people, receives no representation and has no control over its budget, because it is considered an extension of the federal government, much like any federal agency. The people of the Beltway pay taxes like any other citizen, but the city has to ask the federal government for permission to spend the tax dollars raised by its residents.

The answer is often 'no.'

The city’s residents have long decried this paternalistic control by a government that ignores the rank poverty, homelessness, and crime only miles from its hallowed halls.

The agitation for DC statehood has reached such a fever pitch that, while the US Constitution unequivocally states, "no taxation without representation," in Washington DC, since November 2000, license plates say: "Taxation without Representation."

The local elected leaders of Washington DC, have taken another step this week, threatening the "absolute supremacy" of Congress. The city’s government is sending a $13 billion budget to Congress this year, but, unlike every other year when they asked permission to spend residents’ tax dollars – they aren’t going to this time – they are just going to use the tax dollars like all 50 states do.

The US Congress has called the act by DC’s newly-elected mayor "insurrection," and has said that the refusal to wait for Congress to approve the spending is in violation of the Constitution and could result in criminal penalties.

Muriel E. Bowser (D) is leading the fight for the District to become the 51st state, an effort supported by the city’s diversifying local economy, less dependent on federal aid than it has been in recent years. Bowser has the support of her constituents, with over 71% of the District’s voters in favor of statehood.

The District’s mayor not only points to economic self-determination, but also calls the continued refusal by Congress to grant DC statehood "the biggest ongoing voting rights violation," as the 672,000 US citizens have no direct representative in the US Congress.

Likening the situation of DC residents to slavery, the mayor said recently, "One hundred and fifty-four years after President Lincoln abolished slavery in the District of Columbia, we remain at the mercy of those we did not elect to office."