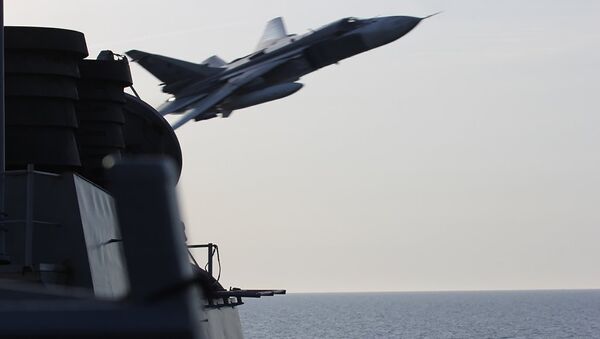 © REUTERS / US Navy/Handout via Reuters
Subscribe
International
India
Africa
The incident involving the pair Russian Su-24s that buzzed the USS Donald Cook is simply another indication of Washington's bloated and dangerous military commitments around the globe, says veteran US political commentator Pat Buchanan.

Commenting on the incident in a piece for The American Conservative, Buchanan, a veteran paleo-conservative known for his criticism of both neoconservativism and liberal interventionism, recalled that "the Russian planes carried no missiles or bombs." This, he suggested, was an indication that their "message [was]: What are you Americans doing here?"

And that message, he stressed, was the one the US military should be considering when it comes to its activities worldwide.

"In the South China Sea, US planes overfly, and US warships sail inside, the territorial limits of islets claimed by Beijing. In South Korea, US forces conduct annual military exercises as warnings to a North Korea that is testing nuclear warheads and long-range missiles that can reach the United States."

"US warships based in Bahrain confront Iranian subs and missile boats in the Gulf."

"Yet in each of these regions," Buchanan emphasizes, "it is not US vital interests that are threatened, but the interests of allies who will not man up to their own defense duties, preferring to lay them off on Uncle Sam. And America is beginning to buckle under the weight of its global obligations."

Putin Identifies Grip of Neocon-Liberal Militarists Running US Policy
If Washington is so hard up about the rocks and reef in the South China Sea, the commentator suggests, it should impose tariffs on Chinese goods. At least that way "US companies and consumers [would] pay the price battling Beijing," and not, if worst comes to worst, "US soldiers, sailors and airmen."

The same, Buchanan suggests, can be said about South Korea's defense. "Let South Korea and Japan build up their forces to deal with the North, and put Beijing on notice: If China will not halt Kim Jong Un's nuclear weapons program, South Korea and Japan will build their own nuclear deterrents…Why must we forever deter and, if need be, fight North Korea?", he asks.

"And why is the defense of the Baltic republics and East Europe our responsibility, 5,000 miles away, not Germany's, whose economy is far larger than that of Russia" (at least when not counting PPP).

A former cold warrior himself, Buchanan recalls that "even during the darkest days of the Cold War, US presidents refused to take military action in Hungary, Czechoslovakia, or Poland. When Moscow intervened there, the US did nothing."

Neocons Now Openly Pushing for 'Dark Horse Candidate' General to Oust Trump
Now, with most of Soviet-aligned Eastern Europe, including the Baltic states, breaking off from Moscow's orbit and joining NATO, new dangers have emerged. "When did the independence of Eastern Europe become so vital an interest that we would now risk war with a nuclear-armed Russia to ensure it?"

Moreover, "under Article 5 of NATO, an attack upon any of 28 allied nations is to be regard as an attack upon all. But is this the kind of blank check we should give Turkey's Recep Tayyip Erdogan, who a few months back ordered a Russian fighter plane that crossed into Turkish territory for 15 seconds to be shot down? Do we really want to leave to this erratic autocrat the ability to drag us into a war with Russia?"

Ultimately, Buchanan stresses, "since the end of the Cold War in 1991, [the US] has been steadily bled and slowly bankrupted. We are now as overextended as was the British Empire in the 1940s. And like that empire, we too are being challenged by nations that seek to enlarge their place in the sun – a resurrected Russia, China, Iran."

This, the analyst suggests, means that the time has come "for a reappraisal of all the war guarantees this nation has issued since the beginning of the Cold War, to determine which, if any, still serve US national interests in 2016. Alliances, after all, are the transmission belts of war."

"This is not isolationism," Buchanan insists. "It is putting our country first, and staying out of other people's wars. It used to be called patriotism."

A veteran political commentator, columnist and writer, Pat Buchanan served as the White House Communications Director for the Reagan administration.