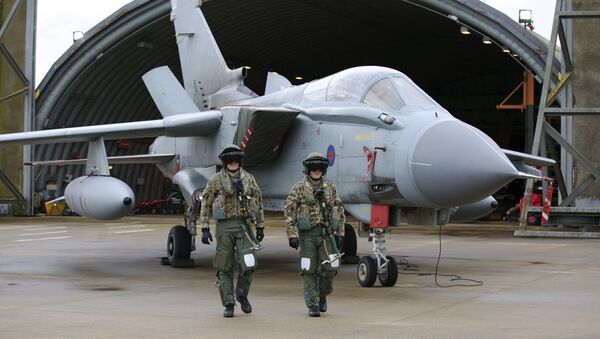 According to official UK Government statistics, only four airstrikes have been conducted by the Royal Air Force during March and the first week of April, despite the prime minister’s claims of a ‘vital’ role of the country in Syria.

Complicated Cooperation: UK Admits Airstrikes in Syria Aren't Hurting Daesh
The United Kingdom Ministry of Defense posts monthly official statistics of airstrikes in Iraq and Syria since October 2014. According to its latest publication, only three or four air strikes took place during last five weeks. This is less than 14 strikes that took place in January or seven in February.

This barely corresponds to British Prime Minister David Cameron's claims that UK forces would play a "vital, battle-winning" role in the conflict.

In his 2015 speech to MPs justifying British action in Syria, Cameron said: "We have the assets to do that, and we can significantly extend the capabilities of the international Coalition forces."

During that speech, Cameron specifically named the Brimstone missile system  as a key strategic reason for the UK to extend its campaign into Syria. However, literally no strike has been conducted using this weapon.

The official position of United Kingdom is that it sees Syria and Iraq as one single theater of war.

According to a Ministry of Defense spokesperson, "[MoD] makes no apology that our focus has been helping recapture key Iraqi cities such as Ramadi and Hit. Iraq and Syria are one battlefield in this fight and our planes will operate wherever they can be best used."

The need to extend airstrikes in Syria is heavily debated in British Parliament and the opposition Labour Party whom Cameron allegedly called "bunch of terrorist sympathizers" who will most likely use the drop-off in airstrikes to their advantage.