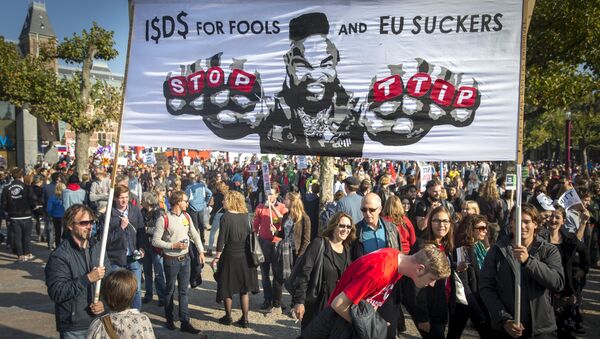 © AFP 2023 / Jerry Lampen
Subscribe
International
India
Africa
A Dutch petition demanding another referendum - this time on the controversial Transatlantic Trade and Investment Partnership (TTIP) negotiations between the European Union and the United State - has gone past the 100,000 mark and is rapidly gaining support.

Dissociative Disorder: Total of 61% of Dutch Spurn EU-Ukraine Deal
People in the Netherlands delivered a blow to the European Union last week in a referendum over Ukraine's accession to the EU, which developed into a vote of confidence in the EU. On a turnout of about 33 percent, 61 percent voted against the Approval Act.

Both petitions use the Dutch system, whereby 300,000 signatures are needed to force a referendum and, although the Ukraine one was started as a joke by a satirical magazine, the TTIP vote could prove more damaging and controversial.

The TTIP negotiations are due to create the biggest trade pact in the world, between the European Union and the United States. However, the talks have been beset by controversy — not least over the massive lobbying by multinational companies and worries that they are likely to be able to sue governments for loss of trade.

Critics of the TTIP deal point to the fact the European food regulations are different from — and some say more stringent than — those in the US.

TTIP-EU Proposal on Regulatory Cooperation Threatening Democracy
They also fear strict European environmental regulations will be flouted under the proposed deal, which critics say has been dominated by big business lobbying. Concerns have also been raised that EU regulations in every sector will be rendered powerless, because multinational companies will hold more powers under TTIP.

Crucially, at the heart of the TTIP is a controversial proposal for an investor-state dispute settlement (ISDS) mechanism, which would allow companies to sue governments if their regulations or laws affected their profits. Thus, if a US multinational company lost profits because their product or service was banned by law for health or other reasons, they would be able to sue a government — or the EU — for loss of earnings.

#TTIP a warning from the Dutchhttps://t.co/ygKiyiyL0l

Under ISDS, in April 1997 the Canadian parliament banned the import and transport of MMT, a gasoline additive, over concerns that it poses a significant public health risk. Ethyl Corporation, the additive's manufacturer, sued the Canadian Government for US$251 million, to cover losses resulting from the "expropriation" of both its MMT production plant and its "good reputation."

Tobacco giant Philip Morris is currently suing Uruguay and Australia over tobacco packaging and the Dutch insurance company, Achmea, is suing the Slovakia for trying to reverse health privatization.

Whoever said the European Union was about the people? #StopTTIP pic.twitter.com/qmjdQhYB2h

"Large companies can sue governments in special tribunal. Europe will have to accept the often poorer American standards for consumer protection, social rights and environmental protection. Then we will see the introduction of US legislation in Europe without citizens or parliaments having any say over it."