US Refuses to Accept Syrian Parliamentary Elections as Credible 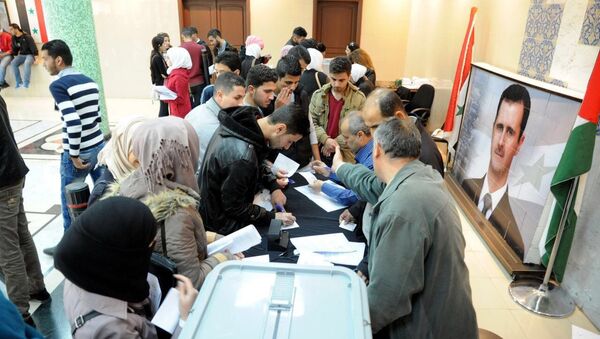 The United States does not regard the parliamentary elections that were held in Syria on Wednesday to be credible, US Department of State spokesperson John Kirby told reporters on Thursday.

WASHINGTON (Sputnik) — On Wednesday, elections were held at 7,000 polling stations across Syria. More than 3,500 candidates competed for 250 seats in the country's parliament.

"It's hard to see in any way how these can be credible elections when the regime continues to kill [its] citizens," Kirby stated. "The United States is unable to see how Syrian parliamentary elections can be credible amid the absence of citizens [who have fled]."

An estimated four million people have fled Syria since the start of the civil war there in 2011.

"What we want see the regime and the opposition continue to have a dialogue about an appropriate transition process."

Wednesday’s contest was the second election held in Syria since the beginning of the civil war five years. In the 2014 presidential election, Syrian President Bashar Assad won in a landslide victory, having received 88.7 percent of the vote.

Russia has repeatedly emphasized it is up to the Syrian people to decide who their political leaders should be.