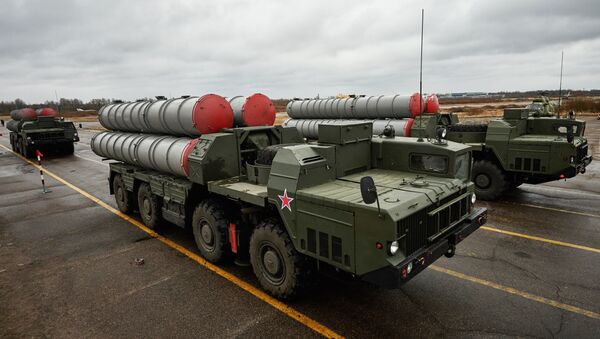 © Sputnik / Alexei Danichev
/
Go to the photo bank
Subscribe
Russia delivery of S-300 air defense systems to Iran dispels Israel's threat to attack the Islamic Republic; at the same time, it may increase tensions between Tehran and the countries of the anti-Iranian bloc, according to Turkish political analyst Hakan Gunes.

Iran May Become Major Regional, Global Actor After Sanctions Lift - Renzi
In an interview with Sputnik, Turkish political analyst Hakan Gunes said that Israel's threat to attack Iran becomes irrelevant in light of the delivery of Russia's S-300 air defense systems to the Islamic Republic, which, however, may fuel further tensions between Tehran and the countries of the anti-Iranian bloc.

Gunes specifically stressed that the S-300 deliveries added significantly to the strengthening of Iran's defense capabilities.

"Aggravating the situation around Russia's S-300 shipments to Iran was first of all provoked by Israel and Saudi Arabia. The S-300 systems are defensive rather than offensive weaponry. They do not pose a threat to any state, and are designed to ensure the safety of a country's airspace from a possible missile attack," he said.

According to him, the S-300 supplies to Iran alarmed Israel and Saudi Arabia, which have repeatedly threatened to launch a missile strike on the Islamic Republic.

"Israel and Saudi Arabia have more than once made statements about a medium-range missile strike on Iran's infrastructure. These statements became irrelevant now that Iran has received the S-300 systems," Gunes said.

Crude Awakening: Iran's Oil Revenue Jumps 90% After Lifting of Sanctions
He also pointed to contradictions in Washington's relations with its allies in the region, including Israel, Turkey, Saudi Arabia and Qatar, something that have been in place in the past 18 months.

Gunes suggested that these countries cannot wait to see US President Obama's term end after the November elections in order to intensify their anti-Iranian activities. He predicted that the next few months may see further rapprochement between Turkey, Saudi Arabia and Israel.

In case of a conflict with Iran, Turkey and Saudi Arabia are most likely to turn to the Israeli lobby in the US for support, according to him.

"With an ever-increasing activity of the countries of the anti-Iranian bloc, confrontation between them and Iran could escalate after the November elections in the US," Gunes said.

The first batch of the S-300 surface-to-air missiles capable of downing jets was delivered to Iran on April 11, according to Russian Deputy Prime Minister Dmitry Rogozin.

Safe Skies: Russia Delivers S-300 Air Defense System to Iran
Russia and Iran signed a 900-million-dollar contract in 2007 amid opposition from Israel and the United States. The deal was suspended after the UN Security Council imposed sanctions on Iran in mid-2010.

In April 2015, Russia resumed talks on S-300 deliveries following a framework agreement on a landmark pact that aimed to ensure the peaceful nature of Tehran’s nuclear program.

Israel, in turn, criticized Russia's decision to go ahead with arms deliveries to Iran, saying that it would allegedly further destabilize the region.