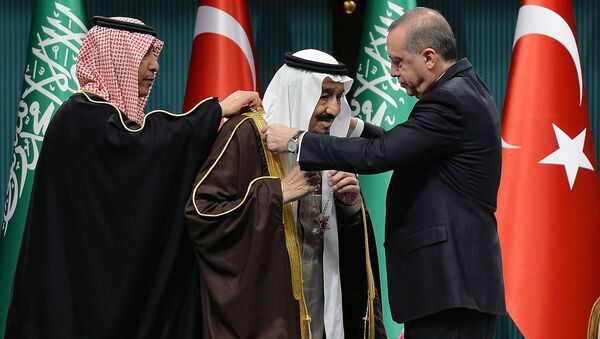 Respected Turkish political scientist Behlul Ozkan, the author of a number of studies on 'political Islam', suggests that contemporary Turkey is starting to look less and less like an independent power, and more and more like a Gulf dependency.

Saudi King's Demands for Visit to Turkey: 500 Mercedes-Benz, Private Toilet
In its foreign and domestic policy, Turkey, which is now set to chair the Organization of Islamic Cooperation (OIC), is giving more and more importance to the ideas of 'political Islam'.

The Saudi king's visit to Ankara on the eve of the OIC summit, analysts say, has served as additional confirmation that Turkey's foreign policy has turned in the direction of the bloc of Sunni Persian Gulf monarchies. Commentators in the West, meanwhile, are asking more and more about the direction in which contemporary Turkey is heading.

Speaking to Sputnik Turkey, Dr. Behlul Ozkan, a well-known researcher of political Islam, suggested that the Persian Gulf monarchies that Ankara has come to rely on as its strategic allies have come to run the show, stifling Turkey's attempts to become a major regional power through its special brand of Muslim Brotherhood-based 'moderate political Islam'.

"Beginning in 2011," Ozkan recalled, "the Turkish leadership began to make plans to expand its influence in the Middle East and to become a regional leader. The main objective of this foreign policy strategy, proposed by [Prime Minister] Ahmet Davutoglu amid the events of the 'Arab Spring' was to bring the Muslim Brotherhood to power in countries from Tunisia to Turkey. This policy was actively put into practice by President Erdogan."

"It was assumed that the Muslim Brotherhood would come to power in Tunisia and Syria, while Hamas would emerge in Palestine; the position of leadership, accordingly, was meant to be taken up by Turkey."

In reality, Ozkan said, "the position to which Turkey has actually arrived can be seen today during the Saudi King's visit. The fact that Erdogan, for the first time in his presidency, has decided to meet another head of state at the airport, shows us who the real leader of the Islamic world is, and what Turkey's plans to support the Muslim Brotherhood have actually led to." 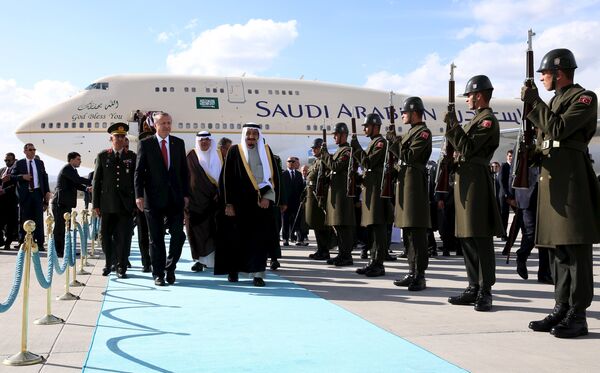 Wait, What? Erdogan Welcomes Saudi King With Russian Military March (VIDEO)
"In spite of the fact that the Muslim Brotherhood has very tenuous connections to the principles of democracy, the movement [nevertheless] implies that its representatives come to power through elections. Saudi Arabia, characterized by its medieval theocratic foundations, has perceived this Islamist political structure as a serious threat."

"At first, the Saudis supported the coup in Egypt; then, they contributed to the sharp radicalization of the Turkish-supported 'moderate' Islamists in Syria. Turkey's ambitious project to advance the Muslim Brotherhood to leading positions in the Islamic world has hence been curtailed by the efforts of Saudi Arabia and the United Arab Emirates; from its ambitious claims to dominance, only disappointment remains."

Moreover, the political analyst added, "with regard to the political situation inside Turkey itself, here [too] things are in a sad state. At present the country faces a reality where it has become impossible to carry out free and democratic elections, where opposition parties are forbidden from holding rallies and protests. It is as though Turkey has returned to the 1940s. Democratic principles are not respected, the rights and freedoms of citizens are violated, and the rule of law remains only on paper."

For a long time, Ozkan recalls, the ideology of the Muslim Brotherhood, which in contrast to the Saudis does not form political policy exclusively on a religious basis, has been supported by Western governments.

Ankara Backs Chemical Attacks: Obama Lets Erdogan Do 'Whatever He Wants'
"Western countries called this strategy 'political moderate Islam' of the 'Turkish model'. However, what is happening in Turkey right now has given rise to sharp criticism from the Western press. The authorities' authoritarianism, violations of the freedom of speech, of the press, of assembly – all this shows that the 'Turkish model' does not work even in Turkey itself."

At the same time, Ozkan explained, Ankara's growing political dependence on the countries of the Persian Gulf can be explained by its economic dependence on Gulf investments, which spiked upward beginning in the late 1980s.

"The role of Gulf monarchy capital in Turkey is very high. Turgut Ozal [Turkey's president between 1989-1993], provided for the free flow of finance between Turkey and the Gulf monarchies."

"It is well-known that the influential Topbas family, which now supports the ruling Justice and Development Party (AKP) is very closely linked to these financial flows. Murat Cetinkaya, who has recently been appointed to head Turkey's Central Bank, at one time held a senior position in the Kuveyt Turk Bank."

Why Saudi Arabia's Bid for Superiority in Middle East Lacks Reason
"We can also recall Erdogan's comments about Yasin al-Qadi, a Saudi banker and Muslim Brotherhood member currently listed on a United Nations blacklist. Erdogan, even as prime minister, voiced his full confidence in al-Qadi, to the point where he signaled his willingness to vouch for him."

Hence, Ozkan notes, the financial aspect too is also doubtlessly one of the major reasons for Erdogan's decision to meet the Saudi king personally at the airport.

For their part, the political analyst notes, Western countries continue to perceive Turkey first and foremost as a member of the NATO alliance, and, despite mild criticisms of the authorities, have generally turned a blind eye on the deteriorating situation in the country, primarily because they view the country as an important 'buffer zone' in the Middle Eastern migrant crisis.

"By and large, the West is not really concerned over whether Turkey develops in the direction of an authoritarian regime, or observes democratic principles. It sees Turkey only as a 'gasket' between itself and the inflamed Middle East. In principle, this approach is not very different from that which existed during the Cold War."

Ultimately, Ozkan suggests, "the transformation of Turkey into 'another Syria'" would be disastrous for the West. "Hence, Western countries believe that Turkey needs a stable government. Today, the ruling AKP has no real competitors, and only one question remains: whether the current government will be able to keep the country from sliding into the abyss."

The political reality in the Middle East is that "the clashes in the Middle East are not fueled by Sunni-Shiite differences, but by the ideology of Wahhabism which has been developed and fed by Saudi Arabia. I think the West is looking for the roots of the problem in the wrong place. Figuratively speaking, Saudi Arabia is the swamp, while the West now chooses to struggle with the malaria-carrying mosquitos instead."

"Unfortunately, Saudi Arabia, which has served as the main source of problems in the Middle East since the Cold War, remains one of the most important allies of the West. European research institutes are vying to present moderate Islam in a positive light. But these organizations are funded by the Gulf monarchies – countries such as Saudi Arabia and Qatar, which spend millions of dollars in the Western media in order to promote themselves," Ozkan concludes.