For the Long Haul: Moscow-Beijing Ties Move to a 'Higher Level' 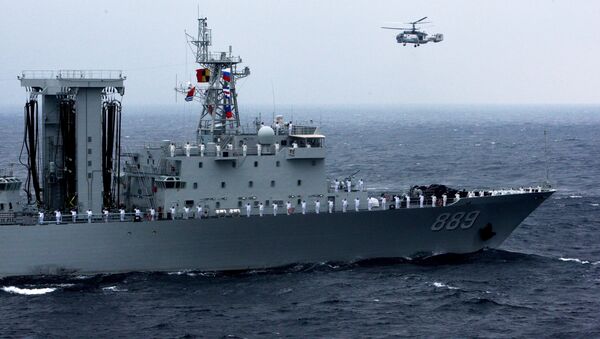 Military cooperation between Russia and China continues to show signs of developing, according to Lyle J. Goldstein, Associate Professor in the China Maritime Studies Institute at the US Naval War College in Newport.

Good as Gold: Why Russia and China Are Busy Buying Bullion
In his article published by the US magazine National Interest, Lyle J. Goldstein, Associate Professor in the China Maritime Studies Institute at the Newport-based Naval War College, pointed to more efforts by Russia and China to move bilateral military collaboration to a "higher level."

According to him, "the rapidly changing balance of power in the western Pacific, not to mention thirty-plus years of stable relations," clearly counters critics' arguments about what they described as a yet-to-be-developed strategic coordination between Russia and China.

Russia
Unprecedented Feat: Russia and China to Build Railway to Eastern Siberia
In this regard, he referred to the Chinese J-11, J-15, and J-16 fighter jets, which he recalled "are all potent modifications of the successful Russian design" of the fourth generation multi-role fighter Su-27.

He also mentioned the YJ-12 and YJ-18 supersonic anti-ship missiles which he described as "Chinese spinoffs from Russia's recognized missile prowess."

Russian-Chinese naval drills during 2014 and 2015 signaled "a more ambitious program of military collaboration which now seems to be in the works," according to Goldstein.

He recalled that the drills which took place in the Sea of Japan in August 2015 was the largest ever Chinese-Russian joint naval exercise, which notably saw "the inclusion of numerous Chinese jets that flew into Russia from China, both J-10s and J-7s, and even a PLA Air Force KJ-200 early-warning/ battle-management aircraft."

"Deploying this uniquely valuable platform to this exercise does indeed convey the notion that China and Russia are now seeking to move the military partnership to a higher level," Goldstein pointed out.

US May Start Lagging Behind Russia, China in Space Exploration
Shortly after the end of the drills, Russian Defense Minister Sergey Shoigu, for his part, said that military cooperation between Russia and China forms the basis of a strategic union between the two nations and this partnership is having a stabilizing effect on the international situation.

Last month, Chinese Foreign Minister Wang Yi said that Russian-Chinese relations are able to resist any international crises, and that temporary factors cannot prevent the two countries from enhancing their cooperation. He touted the relations between Moscow and Beijing as "mature and stable."