'The Silent Majority': The Improbable Successes of Bernie Sanders 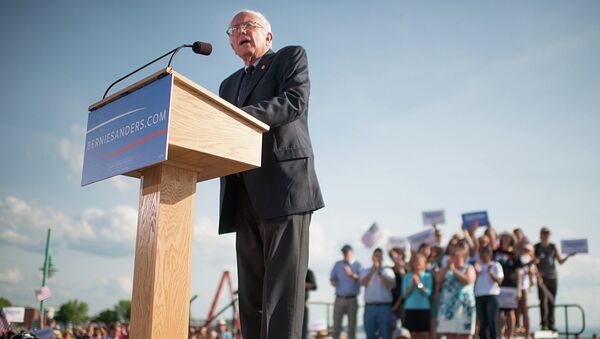 A massive rally in support of the Democratic Candidate Bernie Sanders has gathered tens of thousands of people in Washington Square Park in lower Manhattan. Eugene Puryear, activist, author and politician, joined Brian Becker on Radio Sputnik’s Loud & Clear to listen to reports and discuss the secret of candidate’s improbable success.

Asked about Bernie Sander's campaign tactics, Puryear noted that the candidate uses mass mobilization tactics because the majority of his supporters are people who are not traditionally considered active voters; young people, generally newer to politics, more progressive and, coincidentally, skeptical about politicians and those in power.

"I think that Sanders supports being able to have this street manifestation —  not only to get out and get excited, but also to allow people to see that they are not alone, and can feel the power of a movement. That is really a key piece of how he is running his campaign. This is exactly what his advisors were saying," claimed Puryear.

Verizon CEO Slams Sanders as Senator Joins 40,000 Employees on Picket Lines
Discussing the social and economic basis of the Sanders campaign's surprising successes, Puryear noted that Sanders "routinely gets 80+ per cent of votes of people who are under 30," but, after a closer look at the statistics, it becomes evident that he is supported by college graduates who have to work at positions that do not require a college degree, and still carry debt for their education. These people, according to Puryear, want "people who come behind them to have free college, not in a forward-looking, but rather in a backward-looking reality."

"There are also a number of blue-collar workers who were heavily devastated by trade deals like NAFTA or WTO, giving most-favored-nation-trading status to various countries, leading to a large exodus of manufacturing jobs," Puryear declared.

He noted that Sanders's campaign is "unusual for a US Senator, where usually the most pro-worker people are always for fracking and [unpopular] things like that because they believe it brings jobs." However, Sanders has consistently been outspoken about the urgency of countering climate change.

According to Puryear, Sander's supporters "are not measured at the polls; they are not likely voters, they don't vote all the time, and thus people didn't see it coming."

"Certainly, it's," he suggested, "the silent majority for progressive policies."

"This isn't a normal election," Puryear observed. "People are in the streets. People are looking for solutions that are far outside the political mainstream… What are you going to see, both for good and for bad, is ideas breaking through that are breaking the logjam of this neoliberal capitalist political consensus and that's roiling the entire political establishment."