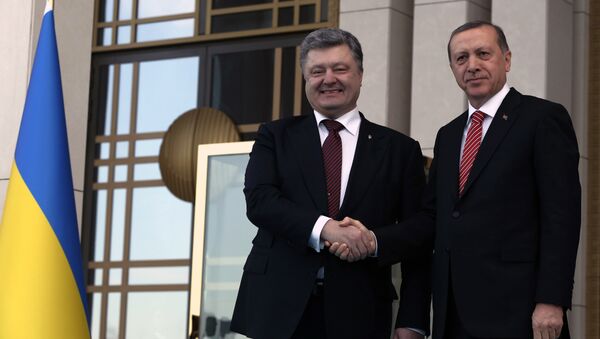 Now that Turkey has announced the creation of its own space agency, it is eagerly looking for international partners. Luckily for Ankara, Ukraine is available - some might say desperate - for economic development.

On Tuesday, the Turkish government made a surprise announcement. Following remarks made by Turkish Forestry and Waterworks Minister Veysel Eroglu, Ankara plans to create its own space program.

"Who does NASA think it is? We’re better than them. They might have satellites, but we have our Gokturk," Eroglu said, according to Hirriyet Daily News, referring to one of Ankara’s two communication satellites.

But before it can compete with the US, which has over 500 satellites, Turkey needs to improve its own satellite technology, and it seeks international help from whomever is willing.

Enter Ukraine. In the wake of the resignation of Prime Minister Arseniy Yatsenyuk, Kiev is desperate to revive its struggling economy.

"They are going through a painful transition away from the previous leadership and trying to create a new approach, a stronger economy, tackling corruption," US Senator Dick Durbin told Sputnik.

Kiev appears to be betting that Turkey’s fledgling aerospace industry could provide a solution.

"We are pleased to observe that Ukraine is keen to share and develop technology with a NATO member state," a Turkish procurement official said, according to Defense News.

"We think we can efficiently cooperate in developing international [NATO] standard systems."

Turkish Prime Minister Ahmet Davutoglu visited Ukraine in February, in an effort to boost ties between the two countries. Beyond aerospace, Ankara and Kiev plan to coordinate across a number of industries, including military communication, navigation systems, aircraft engines, and radar technology.

"The two-day visit of the Turkish ships in the Ukrainian port is happening in accordance with the plan of activities on the international cooperation of the Ukrainian Ministry of Defense and the Ukrainian Armed Forces in 2016," reads a statement on the Ukrainian Navy’s Facebook page.

While Turkey and Ukraine seem to be entering a new phase of friendship, US geopolitical intelligence firm Stratfor doubts the relationship will last.

"Geopolitics makes for strange bedfellows, and at times countries with little in common politically or culturally still form agreements and alliances that make strategic sense," reads a March Stratfor analysis.

"Any Ukrainian and Turkish military cooperation is likely to be limited as the two countries primarily focus on their respective conflicts in eastern Ukraine and Syria, which are entirely distinct in terms of both geography and tactics."