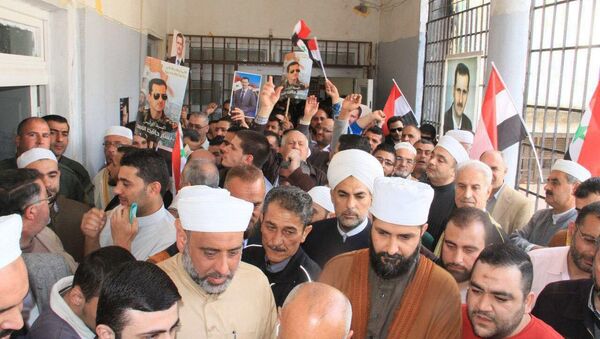 "It is a show that the state is still functioning with its constitutional platform and its parliamentary platform as the legal representatives for the people of Syria," Dr. Chaer tells Loud & Clear, referring to Wednesday’s Syrian elections.

"It’s a statement locally, regionally, and to the world that the state is functioning with all of its capabilities," he stated.

Giving Peace a Chance? Syrians Go to the Polls as Peace Talks Resume

While the Western media frequently portrays Syria’s government as a dictatorship ruled by President Bashar al-Assad, the country is actually one of the region’s most functional democracies.

Unfortunately, due to the ongoing conflict, not all of Syria is able to vote.

"Any regions under the control of groups such as al-Nusra or Daesh or the Free Syrian Army are not participating in this election," he said.

Chaer adds that Syrian Kurds will also be unable to vote, "purely because it’s quite dangerous to perform the elections…in their region because of fear of ISIS…infiltrating their regions."

On the exclusion of the Kurds from the Syrian peace talks in Geneva, Chaer ascribes the decision to "geopolitics."

"[It’s] partly the fear of the Turkish establishment of…autonomy of the Kurdish people," he asserted.

Whatever the outcome of the elections, the United States seems intent on overthrowing the legitimate Assad government.