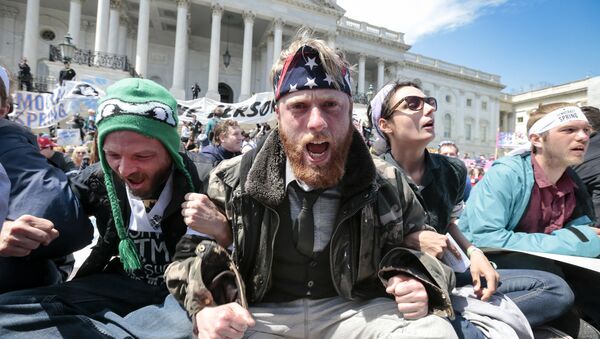 On Day 3 of the Democracy Spring sit-ins #DemocracySpring and #BlackLivesMatter protesters are set to be arrested for blocking the Capitol entrance in protest.

Update: Arrested protesters are released to cheers of "thank you"

​On April 2, a group of protesters began marching from Philadelphia to Washington, DC. That group and their effort, titled Democracy Spring, traversed the distance until April 11, which marked the start of planned sit-ins at the Capitol to protest the influence of money in politics.

Who is Democracy Spring and what do they want?

Lost in the scant coverage of Democracy Spring, what claims to be a popular movement against corruption and money in politics, is the simple question of who are these people and what do they want. On the group’s website, their list of demands focus on legislation centered on campaign finance reform and election law amendments.

Is this a grassroots movement picking up where Occupy Wall Street left off, is this a movement itself hijacked by powerful big money interests, or some sort of hybrid? Notably, the lead organizations are 501(c)(4) lobbying organizations that are not required by law to disclose their funding.

In addition to calling for campaign finance reform, the group has themed the days of sit-ins starting with Tuesday’s elderly issues, Wednesday’s racial justice platform, Thursday’s focus on labor issues, while Friday attends to youth and student issues, and Saturday focuses on climate justice suggesting the group has platform focuses that extend beyond campaign finance reform.

​On Monday, over 400 protestors were arrested by police for blocking access to the Capitol which was followed by the arrests on Tuesday of 85 elderly protesters.

On Wednesday, the police are setting up and issuing warnings to protesters that if they do not disband they will be arrested. The arrest figures for Wednesday’s nonviolent civil disobedience may exceed the totals for the first two days.

​In total, over 3500 activists have pledged to Democracy Spring that they will risk arrest for acts of nonviolent civil disobedience.

Although the effort has remained peaceful, tensions have mounted between the police and the protesters at times, with the atmosphere alternating from Monday when protesters called on police to join them in the protests, to Wednesday, with much more agitation between the groups and with a man lunging past the police line early Wednesday afternoon to raucous chants from the crowd.