Abbas: Muslim Countries Should Support Palestine in Conflict With Israel 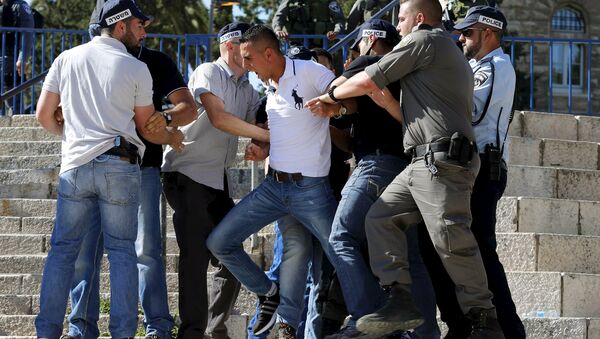 According to Mahmoud Abbas, other Muslim countries should back Palestine in its conflict with Israel.

MOSCOW (Sputnik) — It is the duty of Iran and all other Muslim states who are members of the Organisation of Islamic Cooperation (OIC) to support Palestine in conflict with Israel, Mahmoud Abbas, the leader of the Palestinian Authority, told Sputnik.

"Iran as well as all other Muslim countries member of the OIC have a duty toward Palestine and Al Quds [Arabic name for Jerusalem]. To face the Israeli practices and violations against our people, mainly in East Jerusalem, a lot is still needed to be done," Abbas said in English.

Palestinians seek the recognition of their independent state, proclaimed in 1988, on the territories of the West Bank, including East Jerusalem, and the Gaza Strip. The Israeli government refuses to recognize Palestine as an independent political and diplomatic entity, and builds settlements on the occupied areas.

Iran Claims Israeli-Occupied Palestine in Range of Tehran’s Missiles
Iranian Foreign Minister Mohammad Javad Zarif has previously called on Muslims across the globe to strengthen their unity against the Israeli occupation of Palestinian lands. Addressing the 5th Extraordinary OIC Summit on Palestinian issues in Jakarta on March 7, Zarif lashed out at Israel for its "expansionist plans" to change the demographic makeup of Jerusalem.

The Organisation of Islamic Cooperation, according to its website, seeks to protect the interests of the Muslim world by promoting international peace. The organization has 57 members.