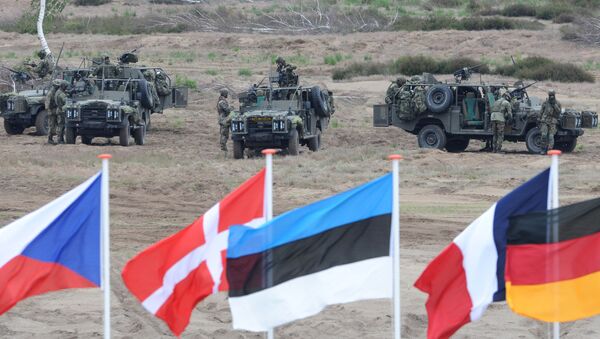 US plans of a military buildup in Eastern Europe undermine partnership relations in the region and have a negative effect on the EU-Russia ties, Russian Ambassador to the European Union Vladimir Chizhov told Sputnik in an interview.

MOSCOW (Sputnik), Anastasia Levchenko — In late March, Pentagon announced plans to deploy additional US Army troops and equipment to Eastern Europe in February 2017 to amount to three fully-manned brigades. The decision comes as part of a wider effort to counter what the United States sees as "Russian aggression," according to NATO Supreme Commander General Philip Breedlove.

"This warmongering and scares about invented Russian aggressiveness certainly produce a detrimental effect on the overall climate in the region, including on the Russia-EU relationship," Chizhov said.

"Those countries that are the objects of NATO surge in military presence in Central and Eastern Europe pursue policies of their own, which are not always conducive to maintaining partnership-style relations with Russia," Chizhov said.

"Since many decisions in the European Union are taken by consensus of 28 member states, I would say that sometimes the result is a position reflecting ‘the least common denominator,’" he continued.

Operation Atlantic Resolve is the US military commitment to collective security with NATO and Eastern European countries against Russia.

In February, the White House announced that the 2017 US budget would include $4.3 billion to help NATO member states and European allies enhance resilience to the alleged Russian "threat". The US-NATO European Reassurance Initiative (ERI) seeks to increase US forces’ training and rotational presence across Europe; increase US Navy participation in NATO naval deployments; deploy equipment and improve existing infrastructure; and build partner country capacities.